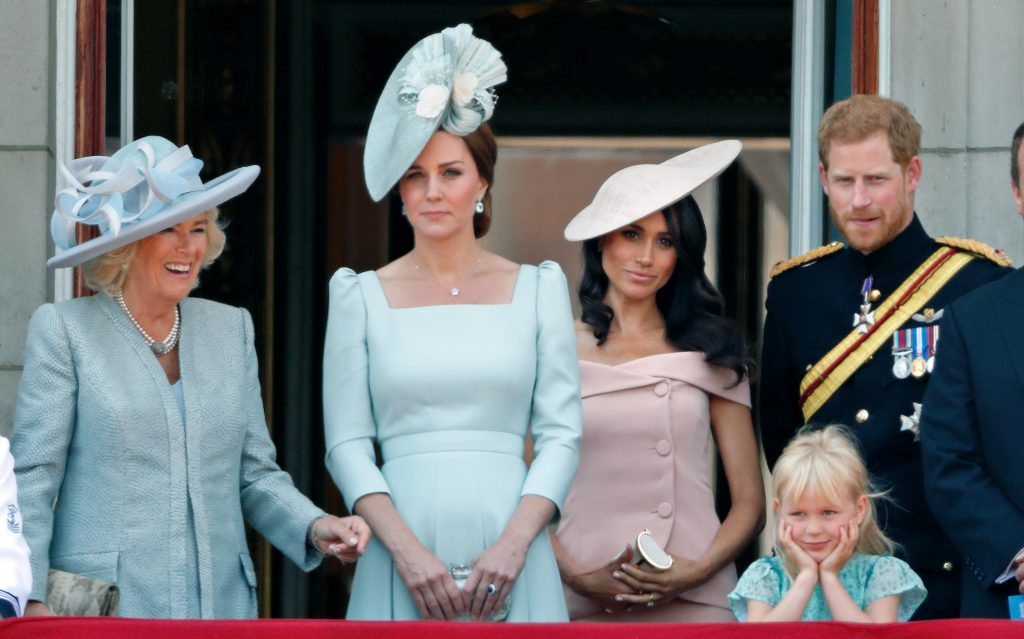 We’re so used to seeing photos of polite, smiling royals when they’re outside that we tend to forget they’re human too and, like all of us, they can get caught up in awkward or embarrassing moments. . . The difference is that their misadventures are photographed for millions around the world to see.

Here are six photos the Dukes and Duchesses wish you hadn’t seen.

In 2018, a photo of Prince Harry circulated in which he had his nose in his armpit.

During the Audi Polo Challenge at Coworth Park Polo Club, the Duke of Sussex proved he may have forgotten his deodorant. The image that circulated online showed the Duke of Sussex standing next to his polo manager Andrew Tucker with his nose in his armpit.

Meghan’s husband could have actually wiped his face, but it sure looked like Harry was sniffing his armpits.

Arriving at St. Mary Magdalene Church, the Duchess of Cornwall had to use her handbag to hold up her dress and prevent a gust of wind from blowing it up. Just a bit of her underpants were shown but Camilla was able to keep her skirt down with one hand and hold her hat with the other.

Kate’s dress blew up during an engagement

Camilla’s daughter-in-law was not so lucky during an engagement in India with Prince William when her skirt exploded. Kate Middleton has had a few Marilyn Monroe moments over the years, but one woman in the family who is always immune to those unfortunate moments is Queen Elizabeth II. It’s because of what’s hidden in the monarch’s clothes.

Courtier Stewart Parvin previously revealed he puts tiny weights in the monarch’s clothing to keep her outfits from blowing in the wind. “I just put some weights in the hem of her dresses and coats and it makes them hang beautifully,” he said per Express. “If there is a flap in the coat, I will sew one on each side of the slit to even it out.”

It has been reported that the reason the Duchess of Cambridge has never adopted this trick is that she tends to wear lighter and finer fabrics than the Queen wears. Royal etiquette expert Myka Meier, the Sun that something Kate has done in the past is wear a bodysuit and “clothing that actually increases static, so it’s a lot harder for something to fly.”

Two photos circulating the web of the Duchess of Cambridge and the Duchess of Sussex before they married their princes have been deemed too risque by royal standards.

Back when she was a student at St. Andrew’s University, Kate attended a charity fashion event and wore a sheer dress over her underwear. Good morning! noted that Prince William had paid over $200 for a VIP seat to watch Kate walk the show and they started dating soon after.

As for Prince Harry’s bride-to-be, she posed in a black semi-sheer outfit during a 2013 photo shoot for Sharp Magazine.

For many, their attire seemed rather tame, but both were deemed a bit too risque by royal standards.

Prince William freaked out when he met Nicole Kidman

Prince William’s face in this photo says it all.

In 2011, the Duke of Cambridge attended BAFTA’s Brits to Watch event in Los Angeles and couldn’t contain his excitement as he met Nicole Kidman for the first time. The viral photo proved that even the future king can be as impressed as the rest of us face to face with a top actor.

RELATED: 4 Of The Funniest Moments From The Royal Family Tour

Henry Cavill as Wolverine Looks Like a Horror Movie Villain