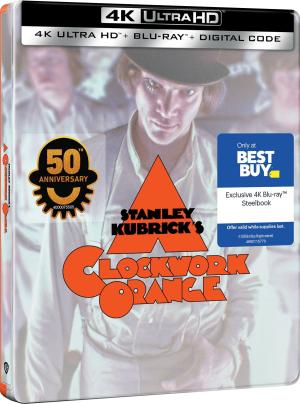 For those who must have titles the week they are released, it’s still a painful week for the old bank account. If you’re fighting cabin fever, this is still a pretty cheap treatment.

Historical events of this week in history, Maverick premieres on ABC television in 1957 with James Garner, The UNCLE man premiered on NBC-TV in 1964 and the 200 millionth guest of Walt Disney World entered the doors in 1985.

Welcome to Episode 18 of Volume 2 of our Weekly Streaming Guide. A preview of the highlights of what’s coming to disc this week, as well as a preview of last week’s announcements.

Once again, due to the multiple references per film, this week is shaping up to be huge.

Notable import on Monday, StudioCanal released a ‘Vintage Classics’ edition from the 1963s The servant. As always with these builds, expect to see a ton of extras and a bit of loot to top it off.

From Universal Pictures, A clockwork orange debuts on 4K disc, both as standard version and as Best Buy Exclusive SteelBook.

Unbreakable becomes available for 4K disc, again as standard edition and as Best Buy Exclusive SteelBook. With this release, the trilogy is over again!

Let’s move on to the new versions now, live Cruel debuts with a whole host of options. Choose one standard version, a Best Buy Exclusive SteelBook, a Exclusive to Walmart and one Exclusive Target.

And the last 4K title this week, F9: The quick saga. And guess what? A’yup, available as standard version and as Best Buy Exclusive SteelBook. For a store that has eliminated 90% of its movie section of its stores, Best Buy still seems obsessed with offering exclusives. At least we don’t need to import from Zavvi to get essentially the same package.

A pretty comprehensive list of Blu-ray releases this week. It’s hard to pick the highlights with so many versions to sort through.

From Paramount, the next track ‘Paramount Presents’ Breakdown streets this week. This one is back number 26 in the series. Their standard label offers Blue fries, Dundee Crocodile: Triple functionality, Hardball, The longest yard (2005) and Roughness necessary.

From Warner Bros, Batwoman: The Complete Second Season is available this week. This one got off to a rocky start, but Season 2 makes the show manageable again. Releases from the Warner Archives The bare spur with James Stewart and Janet Leigh. Also a more recent movie, Right time with Dustin Hoffman, and The window, a film noir from the 1940s.

Arrow Video re-releases The beast and Immoral tales, no need to spend more than $ 80 with a market seller.

From LionsGate, the next version of Vestron Collector Dementia 13 is available. From their standard label, a comedy titled Lady of the Manor.

Criterion Collection’s weekly releases are Love and basketball and To throw.

Horror collectors should look for a mega-set, Andy Milligan’s dungeon by SÃ©verin Films.

The Friday outings are all artistic outings.

Notable announcements from the past week:

A little classic television will be waiting for you shortly. CBS / Paramount revealed that MacGyver: The Complete Collection will be released (finally) on November 2. Although they appear to be BD-R discs, it is still a way to own the whole series on one physical disc.

And from Universal Studios, The Incredible Hulk: The Complete Series will be released on October 29.

FUNimation has released a handful of new anime titles for December. I suspect the list will grow very soon.

What titles are you buying this week? Which are on your wishlist, whether it’s buying an impulse buy or waiting for the right price?