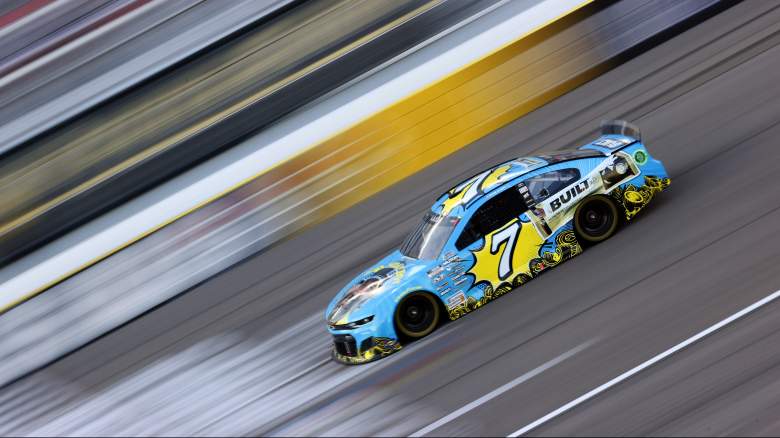 Corey LaJoie is running in the Chevrolet Built Bar.

One of Corey LaJoie’s main sponsors has just grown significantly. Built Bar, the partner that puts LaJoie’s face on their stock cars, has become NASCAR’s official protein bar. The company celebrated with a special video honoring “Talladega Nights: The Ballad of Ricky Bobby”.

The video surfaced on Twitter on Friday, October 1, and featured Nick Greer, CEO of Built Brands, as he attempted to hold a press conference revealing that Built Bar is NASCAR’s official protein bar. Much like Will Ferrell before him, however, Greer struggled to keep his hands by his side while speaking, prompting LaJoie to find a unique solution to the problem.

All kidding aside, Greer and NASCAR have announced a multi-year partnership that will make Built Bar an official partner in stock car racing. The company will continue to support LaJoie, but will also expand to reach a wider audience every week.

“At Built, we strive for high performance and bring everything you have every day. We understand that the journey is just as important as the finish line, ”Greer said in a press release. “Every trip will have its ups, downs, spin outs, stripes and bangs, and everything in between. That’s why we’re thrilled to partner with NASCAR, a sport where the joy of experience – for the driver, crew, sponsor and fan – is a shared quest for greatness. We are delighted to be making this trip together.

The brightly colored yellow and blue stock car drew a lot of comments during the 2021 season, albeit for very different reasons. For example, LaJoie spent time near the front of the field during the Coke Zero Sugar 400 at Daytona International Speedway on August 28. cars.

Another example was the playoff race at Las Vegas Motor Speedway on September 26. LaJoie headed to the 1.5 mile track for his third race with Built Bar as the main sponsor and continued the trend of sticking a massive face on the hood. However, the project went in a different direction to celebrate LaJoie’s 30th birthday.

Spire Motorsports unveiled the design on September 23 and showed off a new version of LaJoie. The company has digitally aged the driver to make him look considerably older. Interestingly enough, LaJoie looked like Mel Gibson’s character in “Boss Level”.

The 2021 calendar continues a multi-year partnership with Built

The protein company sponsored LaJoie for three races during the 2021 season, but trips to Las Vegas and Daytona only extended a strong partnership. Built Brands also sponsored LaJoie during his tenure with Go Fas Racing, taking over the # 32 Ford at Atlanta Motor Speedway and Pocono Raceway.

While LaJoie parted ways with Go Fas at the end of the 2020 season, he continued to work with Built Bar. Spire Motorsports confirmed this in a press release on March 2, 2021, revealing that the company would join LaJoie for the Pennzoil 400 on March 7.

“I can’t wait to have Built Bar on our car this weekend in Las Vegas,” LaJoie said in the March 2020 press release. “Nick Greer and the team at Built Brands have supported me this season. last and I’m really proud that they decided to partner with us at Spire Motorsports this year. The paint scheme they came up with should definitely grab fans’ attention and hopefully sell a bunch of protein bars. Las Vegas is one of my favorite intermediate trails and I can’t wait to have a great day.

See Nicole Kidman and Tom Cruise’s daughter now, who is an artist