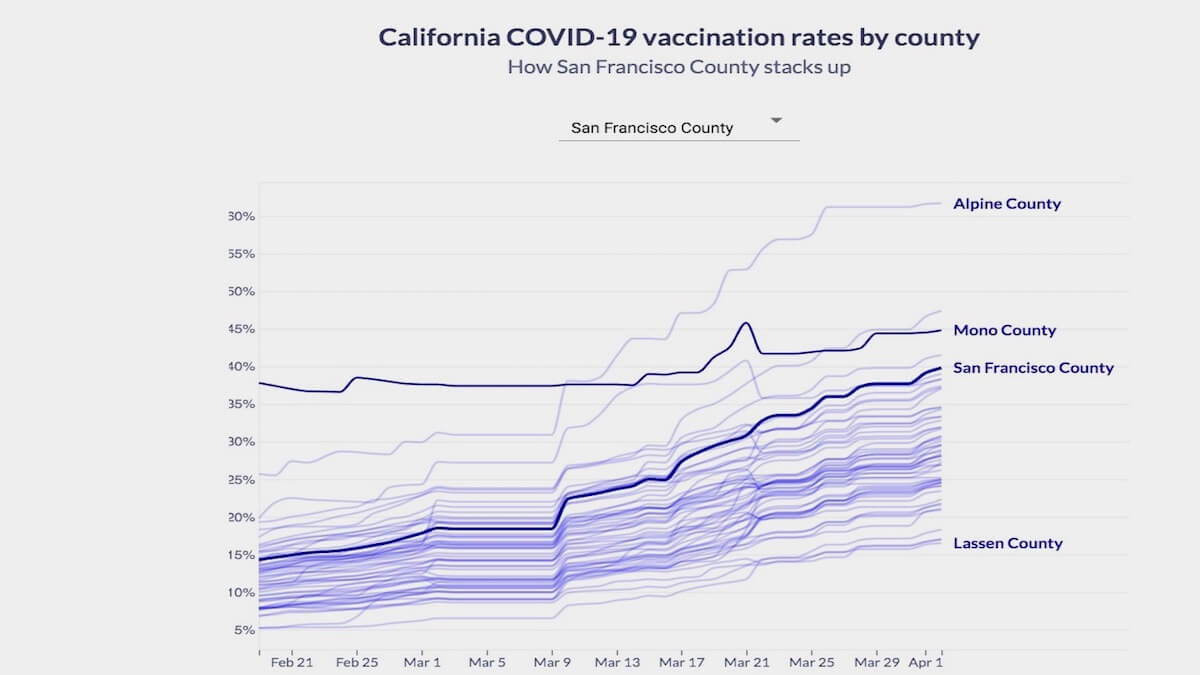 The CDC this morning approved travel for those fully vaccinated. And the agency also responded to its director’s comments that fully vaccinated people never get infected or transmit the virus. Although the available evidence shows that the likelihood of infection and transmission from vaccinees being very low, Mrs. Walensky’s mother should have taught her never to say “never”.

It will be some time before most people get the vaccine. In the meantime, rapid over-the-counter antigen tests are starting to roll out. We will probably see a lot of use soon.

Things are never really so rosy in the land of Covid as we see new cases starting to increase in SF and Santa Clara is warning that we are on the precipice of the 4th wave.

Blue Shield began its takeover of the vaccine distribution system in California by fixing what isn’t broken.

On a lighter note, for those of us who enjoy dark humor, Joe delves into Allison Collins’ lawsuit against the board.

Restaurants and small businesses have secured loans and bailout grants from governments at all levels, but as Kate reports, it’s not enough.

And as a testament to good neighborly communication and cooperation, the Virgin Guadalupe mural on Lilac Alley is falling apart, but it will rise again.

While waiting for The Vaccination, scroll down for today’s Covid issues.

DPH reports that California is “implementing a new version of the California Immunization Registry (CAIR2). As a result, the data may fluctuate throughout the month as the state continues to improve the data set. »Since April 1 47 percent (357,621) of San Francisco residents over 16 had received a dose, and 26 percent (201 920) had received two. On March 31, the moving average of seven days of shooting per day was 9,754. The DPH objective is 10,000 shots per day. To find out where to get vaccinated in and around the Mission, visit our Vaccination page.

After a deep drop and a rapid rise, the estimate of Covid-19 R currently sees San Francisco’s R number slowly declining to reach .93 while the whole maintains its average estimate for San Francisco at .77 and for California at .80. However, note the wide range of uncertainty with respect to the SF number. The range of the Covid-19 R estimate is 0.71 to 1.21 and the set is 0.62 to 1.07

Between March 1 and March 30, DPH added 94 new cases at the Mission or a rate of 15.7 new cases per 10,000 inhabitants. During those 30 days, most neighborhoods had less than 35 new cases. The exceptions were the net (66), Bayview Hunters Point (62), and, surprisingly, the Marina (50). If you remember, the further surge in cases at the marina last fall was the first harbinger of the Citywide wave that followed.

For the week ending March 25, the seven-day moving average of daily new cases in the city had risen again to reach 37 Where 4.3 new cases per day per 100,000 inhabitants, which represents a 23% increase since March 18.

Another low for Covid hospitalizations in San Francisco. Keep an eye out for hospitalizations as new cases increase and you should see the benefits of vaccination. Or not. For the week ending March 31, the weekly rate of change for Covid-positive patients has declined 26%. During this week, the seven-day average availability of intensive care beds was 33 percent and the availability of acute care was 24 percent. On March 31, Covid patients formed 1.75 percent available intensive care beds and 1.5 percent acute care beds. Peak ICU capacity is reported as 100 per cent and 93 percent in acute care.

According to the most recent data from the Federal Department of Health and Social Services, 44 reported Covid, SFGH, UCSF and Kaiser patients had 32.

Despite the increase in the number of new cases, the average positivity rate across the city remains below 1%. Testing has declined in part because of the vaccination. The average number of tests performed is roughly what it was at the end of October.

As of March 31, 23,281 mission residents, or 40 percent neighborhood, received at least one dose of vaccine. It should be noted that the neighborhoods with the highest vaccination rates in the city (one dose) are Japantown (55 percent), Portola (50 percent), Excelsior (47 percent) and Bayview Hunters Point (46 percent).

Based on 474 Covid-related deaths and 35,170 cases, the current case fatality rate (CFR) in SF is 1.35%, while the infection mortality rate (IFR) based on “true infections” is approximately between 0.34 percent and 0.45 percent.