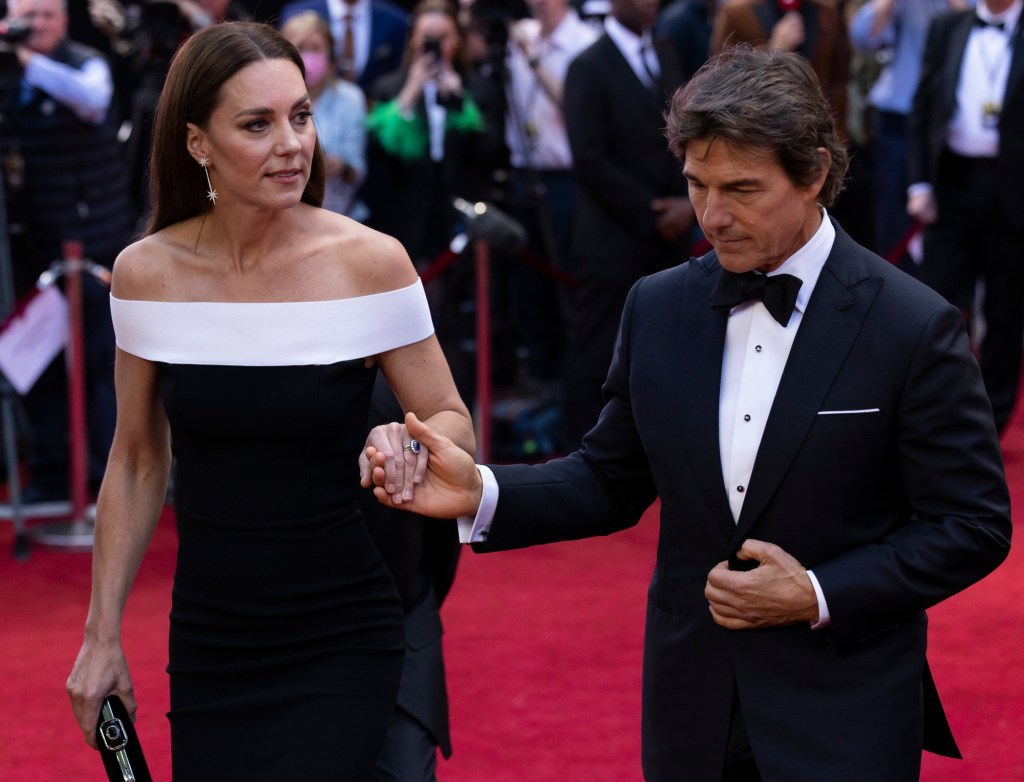 As royal fans gushed about Tom Cruise’s bravery in taking Kate Middleton’s hand to help her navigate a flight of stairs at the London premiere of ‘Top Gun: Maverick’ on Thursday, other watchers noticed something curious thing about the movie star.

The 5ft 7in cruiser stood remarkably tall next to the 5ft 9in Duchess of Cambridge, who walked the red carpet in a pair of black stilettos that raised her height to 6ft or more, the Daily Mail said. The Duchess gained even more illusion of size in her full-length black Roland Mouret column dress.

And yet, Cruise managed to look only about an inch shorter than Kate, the Daily Mail reported. This was especially true when Cruise joined Kate, her husband Prince William, and Cruise co-stars Miles Teller and Jennifer Connelly outside a fighter jet parked in London’s Leicester Square for the premiere.

The Daily Mail reported that it appears Cruise, dressed in a black tuxedo, increased his height with a pair of black stacked-heel shoes. If Cruise resorted to such tricks on Thursday to improve his height appearance, it wouldn’t be the first time in the 59-year-old actor’s history.

There has long been talk of Cruise’s ever-changing height and how well he manages to measure up to his taller female co-stars on camera. There has also been speculation about how he may be using lifts in his shoes or other tricks to look as tall as possible when appearing alongside these women at public events.

Early in his career in the 1980s, Cruise rapparently listed as 5ft 8in or 5ft 9in. When he appeared in promotional photos with Kelly McGillis, his love interest in the 1986 original film “Top Gun,” the 5-foot-10 actress visibly bent her knees and rested her head on the shoulder of the actor so as not to dominate him.

Cruise’s famously tall ex-wife Nicole Kidman, who is 5ft 11in, admitted she had to ditch the heels when they first worked together in the 1990 film, “Days of Thunder”.

“They had put me in really flat shoes, but you could still see I was taller than him,” Kidman said. in an interview which took place while they were still married. “I would prefer to be smaller, but that doesn’t bother me.”

Kidman insisted Cruise didn’t care about being taller than him either.

“I love that he’s one of the most famous actors in the world and he can work with anyone,” she said.

Admittedly, Cruise sometimes didn’t seem to care that Kidman was taller than him at public events, like at the 1997 Oscars when she wore two- or three-inch heels.

Kidman seemed less accommodating about Cruise’s size issues after he caught her off guard by filing for divorce in 2001, after 11 years of marriage. In “The David Letterman Show”, Kidman joked“I can wear heels now!”

Cruise’s next wife, Katie Holmes, is 5-foot-9 and reportedly celebrated the same post-divorce benefit after she blindsided him in 2012 while filing for divorce. People talked about her “pulling a Nicole Kidman” when reports surfaced that she spent thousands of dollars buying 15 pairs of Christian Louboutin heels and lingerie at Barneys’ New York, after Marie-Claire.

If nothing else, the actor’s attempt not to appear so short next to the Duchess of Cambridge reminded viewers of Cruise’s 2010 red carpet appearances with Cameron Diaz to promote their film “Knight and Day. “. In particular, photos of the co-stars posing at the film’s London premiere, also in Leicester Square, got people talking.

“How is he so big?” ” asked a HuffPo title. When Cruise and Diaz, in four- or five-inch heels, stood together for photos, he looked shorter but not “the five inches he theoretically should be, even with Diaz slightly slouched.”

Cruise’s boots appeared to have a 1-inch heel on the outside, HuffPo said. But oddly, his knees were about the same height as Diaz’s. “How did he do it? HuffPo asked “Inside elevators?”

The Daily Mail reported that people can use “inserts”, which are insoles placed inside a shoe to lift the heel of the wear, giving the person extra height. A more extreme alternative, the so-called “elevator shoe”, sees the elevator as an integral part of the shoe, allowing the wearer to increase their height by up to four inches.