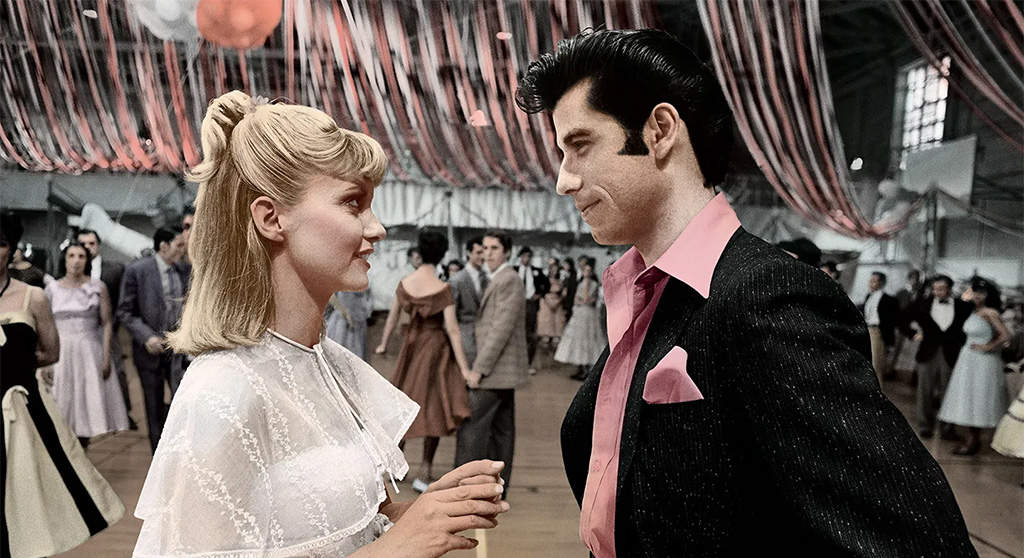 In the repertoire, Newton-John luminous in “Grease”, all the Mad Max; reviews of ‘Glorious’ and ‘Beast’

Film Ahead is a weekly column highlighting special events and repertoire programming for the discerning Camberville movie buff. It also includes capsule reviews of films that are not subject to a feature film review.

The Brattle Theater pays tribute to Olivia Newton-John on Wednesday with a screening of the sock-hop musical classic “Grease” (1978) starring John Travolta as her hunky love interest across the tracks. For the “Midnighters” series, it’s “Freaks,” director Tod Browning’s dark 1932 sequel to “Dracula” (1931), about a carney where the side shows pick up at night. It’s part of a doubleheader with the Ramones-powered teenage rebel flick, “Rock ‘n’ Roll High School” (1979) on Thursday. Judy Garland’s centenary celebration picks two intriguing choices: the Nazi war trial epic ‘Judgment at Nuremberg’ (1961) with an all-star cast including Burt Lancaster, Richard Widmark, Maximilian Schell (who won an Oscar for this movie), Montgomery Clift, Marlene Dietrich, Spencer Tracy and William Shatner (yes, you read that right); and “A Child Waits” (1963), again pairing Garland with Lancaster in a John Cassavetes film also starring the director’s wife, Gena Rowlands. They play Monday and Tuesday respectively.

Finally and gloriously, The Brattle turns next weekend into a mini “Mad Max” festival with the four episodes directed by George Miller: “Mad Max” (1979), “The Road Warrior” (1981), “Beyond Thunderdome (1985) and “Fury Road” (2015). The first three stars Mel Gibson as a surviving anti-hero in a post-apocalyptic world where gas is a fought resource, while 2015’s final chapter has Tom Hardy as Max alongside Charlize Theron’s cyborg Furiosa – and now water is in short supply. Miller cast Hugh Keays-Byrne as Immortan Joe, who holds the keys to the water supply; he played the chief villain, Toecutter, in the original “Mad Max.” The Brattle series arrives alongside Miller’s highly anticipated new film, “Three Thousand Years of Longing,” starring Tilda Swinton and Idris Elba. (Tom Sweet)

Continuing its journey this week at Harvard Film Archives this week it’s Apichatpong Weerasethakul’s “Memoria” (2021), starring Tilda Swinton as a woman who hears strange noises in the jungle at night. (Tom Sweet)

Summer themes run deep in this week’s double repertoire lineup at Somerville Theater. First up was ‘Dirty Dancing’ (1987) and ‘Now and Then’ (1995) – the former, about a dance camp in the Catskills, revived Patrick Swayze as a star and makes Jennifer Gray a “Baby”. One thing the film touches on so subtly and so relevant today is a pro-choice decision Baby makes — with the 1963 setting being pre-Roe v. Wade. ‘Now and Then’ would make a good pairing with ‘The Sisterhood of the Traveling Pants’ (2005), as it’s about women trying to maintain their relationships over time; Rosie O’Donnell, Demi Moore, Rita Wilson and Melanie Griffith are the “now”, and Christina Ricci, Gaby Hoffmann, Thora Birch and Ashleigh Aston Moore are the “then”. The two play Monday and Tuesday, then it’s on (socially) hot moments in Spike Lee’s town with his telltale signature on race and equity, “Do the Right Thing” (1989) and “Crooklyn” ( 1994) on Wednesday and Thursday. There’s coming of age and rebirths with ‘Stand By Me’ (1986) and ‘On Golden Pond’ (1981), which paired Henry Fonda with his daughter Jane – Fonda senior and actress Katharine Hepburn won Oscars for their performance; it was Fonda’s first (although Hepburn’s fourth) and her last film. Last on the week’s double slate is some dark summer stints in the occult, with Ari Aster’s solstice eden turned gonzo “Midsommar” (2019) and George Romero’s “Season of the Witch” ( 1972), in which a bored housewife (Jan White) meets the new neighborhood wife (Virginia Greenwald) who leads the local clan – not to be confused with the medieval Nic Cage picture from 2011 of the same title – with the catchy song of Donovan which is also making its way. They play August 28 and next week. (Tom Sweet)

The Retro Replay at Kendall Square Iconic Cinema Tuesday is part of the ‘Happy Birthday, Mr. Hitchcock’ party: ‘Strangers on a Train’ (1951), the first big-screen adaptation of a novel by Patricia Highsmith (from her first novel). Highsmith would become famous for his five novels about the charming sociopath Tom Ripley (film adaptations include Wim Wender’s ‘The American Friend’; ‘Purple Noon’; and ‘The Talented Mr. Ripley’) and ‘The Price of Salt’, which Todd Haynes would adapt in 2015 as “Carol” with Cate Blanchett as a sort of version of Highsmith, whose sexual orientation clashed with the social norms of the 1940s and 50s. Hitchcock paid just $7,500 for the rights to the story of a sleazy drifter (Robert Walker) and a tennis star (Farley Granger) who meet by chance and plan tit-for-tat murders. Raymond Chandler has script credit, but wrote almost nothing of what’s on screen – Hitchcock and the mystery writer acrimoniously parted ways (as many did with Hitchcock), but the name de Chandler stayed because the studio wanted the name recognized. Most of the screenplay is said to have been written by Czenzi Ormonde (who is co-credited), production associate Barbara Keon, and Hitchcock’s wife Alma Reville. The film echoes the theme of the well-to-do trying to escape murder that is the signature of one of my favorites: Hitchcock’s “Rope” (1948), based on the murder of Leopold and Loeb. (Tom Sweet)

In theaters and streaming

Wes (Ryan Kwanten of “True Blood”) is stuck in an isolated bathroom, which is already a nightmare – well, because it’s a public bathroom. An upbeat, enthusiastic voice (JK Simmons, Oscar winner for “Whiplash”) announces from the next booth, excited for the company and asking for a favor, something more than just passing the toilet paper. In this Lovecraftian-inspired horror-comedy, there are several mysteries: How did Wes’ last relationship end? What is the true identity of his pit neighbor? And what is the nature of the favor requested? Director Rebekah McKendry, a professor at USC’s School of Cinematic Arts and co-writer of a horror sequel to Kristin Dunst’s cheerleading comedy “Bring It On” (2000), pays a devoted tribute to “Color Out of Space” by Richard Stanley (2019). Along the way, viewers may wonder if Wes suffered a nervous breakdown, but the story satisfies regardless of interpretation. Kwanten, on screen the entire time, has facial expressions and body language that help ground the sensational premise. The limited number of actors and tight location increase the tension because the viewer is as ensnared as the protagonist. It’s a gripping study of strange characters, dark but wrapped in a ‘Tales of the Crypt’-worthy ending. (Sarah Vincent) On Frisson.

Dr. Nate Samuels (Idris Elba, “Pacific Rim”) and his daughters Meredith (Iyana Halley) and Norah (Leah Jeffries) visit a family friend Martin (Sharlto Copley, “District 9”) at a wildlife sanctuary in South Africa – a place rich in history, but devoid of deeper meaning here – where family tension takes precedence over the survival of a lion who exacts revenge on all humans. Taking advantage of this creature feature (done before, “Ghost in the Darkness”) will depend on your surroundings: if multiple pandemics aren’t a deterrent, arm yourself with buttered popcorn in a theater with smart customers ready to talk to the screen for silly fun. The cast is better than the movie deserves and has terrific chemistry – skilled at making themselves likable enough to hope to survive, dumb enough to bash a CGI lion (yeah, not smart). If you’re annoyed when characters don’t adhere to the simplest don’t conventions, it always conjures up crowd-pleasing results. Abandon all sense of logic when it comes to this Liam Neeson-like lion, a creature turned mean for following instincts like the shark from “Jaws” (1975). He is indomitable, but unlike most felines, he has poor sense of smell and hearing, and night vision is not his forte. It’s not “Roar” (1981), but there are poachers to serve as political and Serengeti cronies. (Sarah Vincent) At the Landmark Kendall Square Cinema, 355 Binney St.; Apple Cinemas Cambridge, 168 Alewife Creek Parkway, Cambridge Highlands near Gaspareau and Fresh Pond; and AMC Assembly Row 12, 395 Craftsman RoadAssembly Square, Somerville.

Tom Meek is a writer living in Cambridge. His reviews, essays, short stories, and articles have appeared in literary journals The ARTery, The Boston Phoenix, The Boston Globe, The Rumpus, The Charleston City Paper, and WBUR’s SLAB. Tom is also a member of the Boston Society of Film Critics and bikes everywhere.