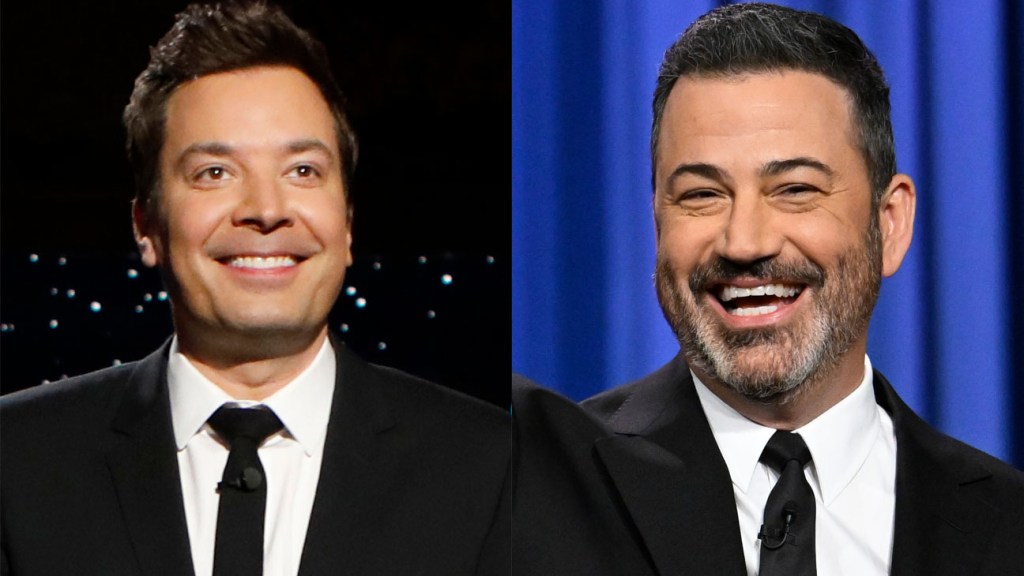 Late-night viewers got a big surprise on Friday when, in honor of April Fool’s Day, Jimmy Kimmel and Jimmy Fallon switched places, taking over each other’s shows for the night.

Much to the shock of studio goers and at-home viewers, Kimmel took over The show tonightinterviewing Hugh Jackman and Bridget Everett, while Fallon appeared in Los Angeles to host Jimmy Kimmel Live! with special guest Justin Timberlake and Kimmel’s Aunt Chippy. The Red Hot Chili Peppers appeared as musical guests on both shows.

The Hollywood Reporter was in the crowd Kimmel (hosted by Fallon) taping, where audience members had no idea of ​​the exchange until Fallon came out on stage to kick off the show, with cameras rolling. As the crowd jumped to their feet, Fallon teased, “Hi, I’m Jimmy,” and as the cheers continued, the jokes continued, “Sit down, you’re going to offend the other Jimmy.”

After a series of monologue jokes (“For surprises on ABC this week, this one’s far behind,” in reference to Sunday’s Oscars drama, and feeling like we’re stepping into the “late-night multiverse” ), Fallon admitted “we worked really hard to keep this a secret,” explaining that the two hosts had been discussing the prank for four years.

After the monologue, the duo had a live taping, with Kimmel at Fallon’s 30 Rock studio and Fallon on Kimmel’s Hollywood Boulevard set. “I love that we did this – I can’t believe we succeeded,” Fallon remarked, noting that the inspiration was “Jimmy and I wanted to have fun with people who mixed us up all the time.” A pass in front of the camera they had filmed earlier in the week highlighted this point, as the two walked in and out of staged photos with fans, and several seemed not to even notice a difference between them.

During the commercial break, Fallon took to the mic to further explain behind-the-scenes details to the LA audience, recalling when he talked to a fan for 20 minutes about how much she loved his show, only for her to notice at the end how she had just met Jimmy Kimmel. But the Tonight’s show the host also said, “I couldn’t be mistaken for a better guy.”

Timberlake appeared as the first guest of the evening, impersonating Kimmel’s “enemy” Matt Damon for the first segment. Dressed in a Boston Red Sox hat and jersey, Timberlake answered questions as Damon about his family and career, and at the end of the spray-painted track “I Love Matt Damon” on the Kimmel’s office.

Fallon’s star and close friend returned in the second segment as himself, but first Fallon – with longtime ties to NBC – recorded promos for that night’s show, teasing, “We are doing commercials, and this is going to air on ABC? I can’t even tell you how happy that makes me.

Timberlake returned to do “Sweet Tweets” with Fallon, a nicer version of Kimmel’s signature Mean Tweets; in New York, Kimmel also gave her take on Fallon’s thank you note segment. Kimmel’s Aunt Chippy, who was unaware of the host swap, was also brought in, as she cried about her nephew’s constant pranks: “There is no end; it never ends.”

At the end of the series, Fallon thanked the show’s writers and producers for “so much work that made it all happen,” and before leaving the stage, he once again addressed the audience in the studio. , admitting, “I was so nervous coming here, what if they boo me?” He received the exact opposite reaction, however, adding, “Tonight was so much fun.”