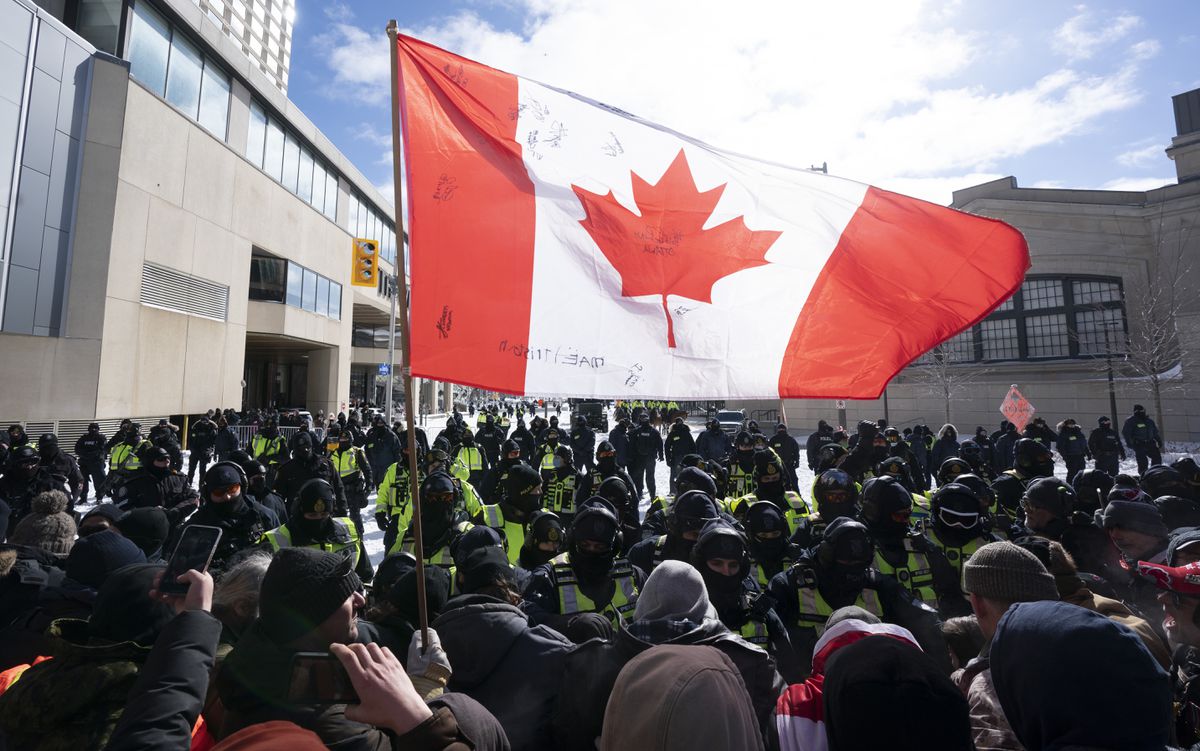 Re Threats, Harassment, Abuse: Welcome To Life As A Journalist In Canada (February 16): Columnist Gary Mason highlights the daily dangers of hate-filled words, whether posted online or on huge billboards that litter the streets of Ottawa.

These vicious posts, endorsed by protesters who are overwhelmingly white males, cannot be considered “peaceful” in any way, no matter how many times they claim to be.

We should all be deeply concerned about the dark forces at work in plain sight.

What do we wrap in the flag of Canada? (February 12): Journalist Ian Brown tells us how our flag has served to frame our stories. His study is a balm for those who wish to fill their cups with refreshing context, without the populist method of explaining complex issues with simplistic answers.

We hear about the so-called freedom convoy that hides behind our maple leaf and is supported by right-wing extremists in the United States. Mr. Brown tells us that history is moving slowly, but today social media is making it exponentially faster.

We need to act faster to maintain the integrity of our own historic values.

The protesters’ fabric messages needed larger, more explicit material supports. However, in the age of Twitter, how useful are words like “freedom” on signs? Enough to ? For who?

Meanwhile, the flag atop the Peace Tower serenely blows over the din below, seemingly representing what should have been reasoned debate below – unless, to paraphrase artist Francisco Goya, the slumber of reason has already produced monsters.

I moved to Canada as a young refugee from East Africa. For me, the Canadian flag signified loyalty to tolerance and respect.

I now understand better what this meant for other generations of Canadians, many of whom gave their lives for mine.

A few weeks ago, something changed. The Canadian flag still represents our great country, but now I feel like it represents something more: a movement of people who are tired of lockdowns, mandates and job losses rather than a choice medical.

It is our flag, the flag of the strong and the free.

With all the turmoil in our country, I no longer know what it means to fly the Canadian flag.

I am offended to have seen so many Canadian flags at these demonstrations.

We are not Americans. We should not use our flag to shout freedom. It should be for joyful events like Canada Day parades, or somber like Remembrance Day. I believe it symbolizes unity, community and peace.

Usually, I’m proud when I see our flag with its colorful maple leaf flapping in the wind. But in the hands of these protesters? Nothing but shame and embarrassment.

The protests have been an attack on cherished symbols of our community and our country, a central reason why so many Canadians are appalled by what they see.

The desecration of the Tomb of the Unknown Soldier is a violation of our collective memory of shared sacrifice. Threats directed against healthcare workers are attacks on a healthcare system that represents our shared commitment to each other in times of need.

The majority of Canadians, who have lost their freedoms at the hands of a minority, should ensure that protesters do not take our symbols as well. They have appropriated our flag for the moment; we should do the work necessary to take it back.

A professor denounces the use of the slogan FUCK TRUDEAU by some Ottawa protesters. He rightly states that it was unlikely to have been said in public by opponents of Lester Pearson or Brian Mulroney.

However, contemporary usage of the word has changed so drastically that it is commonly used in conversation, in song lyrics, in literature – and sometimes even on the pages of the Globe and Mail.

Re Whoopi is an example of how anti-Semitism fuels disinformation (Opinion, February 12): Many years ago I turned on the television and was stunned to see Mel Gibson pontificate about the geopolitical implications of an American military incursion. His ego was Napoleonic, but his military acumen was not (although the French emperor could be wrong).

Celebrity authority seems to be expanding as expert authority is shrinking. How an enlightened democracy can flourish under such circumstances is a mystery to me.

It’s time to consult the oracles. If only I knew which ones.

Part of Whoopi Goldberg’s mistake was to apply 21st century racial categorisations to the early 20th century, which is not unique to Germany: read JS Woodsworth’s 1909 book Strangers at our gates: or Canadians to come for a local vision of the Jewish “race”.

Although these categories have since changed, the insidious nature of anti-Semitism means that hatred of the Jewish people has adapted. Ignorance and fear of difference will unfortunately always raise the specter of anti-Semitism. Like always.

Re Labor Of Love (Opinion, February 12): Office romances happened over time. But for all the positives, there are also a lot of negatives.

Women have had to endure unwanted advances from colleagues and bosses for centuries, adding yet another hurdle to overcome. Sexual harassment at work is devastating.

Keeping things professional helps everyone feel safe and keep going. Clarity around what is appropriate eliminates confusion when lines are crossed. Even when it’s reciprocal, there are complications such as conflicts of interest, favoritism and breaches of confidentiality.

Of course, without “love at work”, romantic comedies and television would be boring. But that’s not real life for most people (glad Barack and Michelle Obama pulled it off). It will happen that we meet our partners in unexpected places.

Let’s not glorify that, in spite of Valentine’s Day. It was an elegy for a reason. Let’s keep it that way.

Letters to the editor must be exclusive to The Globe and Mail. Include your name, address and daytime phone number. Try to limit letters to less than 150 words. Letters may be edited for length and clarity. To send a letter by e-mail, click here: [email protected]

This is how Isabella and Connor are today, the children of Nicole Kidman and Tom Cruise who profess Scientology – Revista Para Ti

Nina Dobrev in a Swimsuit Enjoys a “Saturday Sunrise” – Celebwell