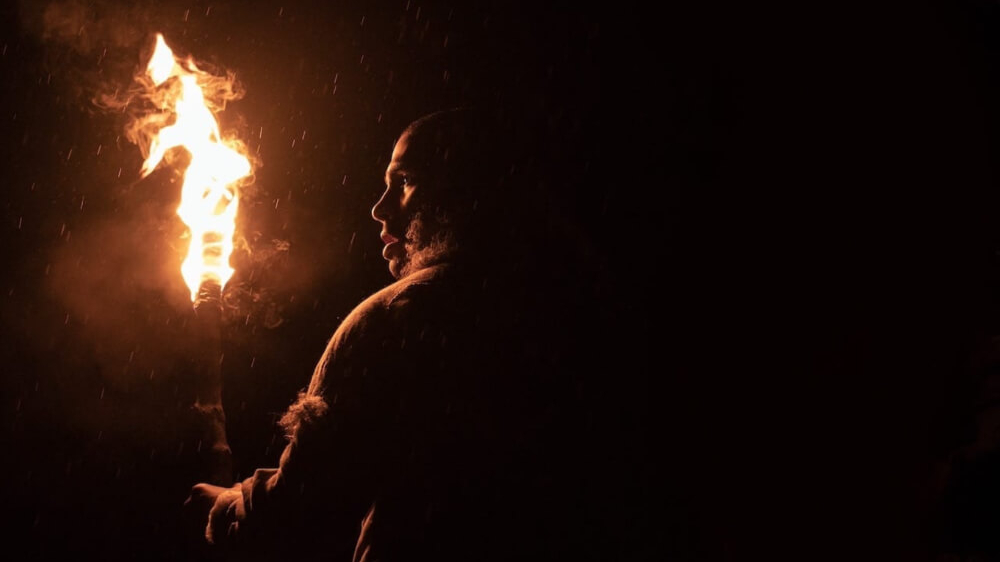 ★★★☆☆ Set 45,000 years ago, as Homo sapiens made inroads into the lands of Neanderthals, Andrew Cumming’s horror thriller The Origin depicts a small tribe colliding with an evil entity in an unfamiliar and inhospitable environment.

Set 45,000 years ago as Homo sapiens made inroads into the lands of Neanderthals, Andrew Cumming’s horror thriller The origin depicts a small tribe coming up against an evil entity in an unfamiliar and inhospitable environment.

Beyah (Safia Oakley-Green) and her family have wandered everywhere looking for good hunting grounds and warm caves to dwell in. Reaching a harsh landscape of rugged mountains and hills, and slowly starving, they begin to feel as if they are being watched. Then they are attacked by a dark menace. Snatched away one by one in classic slasher fashion, Beyah and another survivor turn the tables on the nightmarish creature and uncover a shocking truth.

The origin has an ambitious scope. It’s a film that exudes the primordial atmosphere: the sky is permanently gray and gloomy, the terrain is mostly razor-sharp rocks and boulders, endless wet forests, damp caves where monsters live. . Its visual grandeur is impressive. Another highlight is Adam Janota Bzowski’s score – all moaning, buzzing, quivering, atonal arrangements – delivering menacing landscape shots with plenty of intensity and foreboding. Plus, the jaw-dropping sound design gives horror scenes a satisfying villainy. But it’s the kind of film where, with every step forward, there’s a step back.

Ruth Greenberg’s screenplay is quite intriguing: a creature feature that spins into a tale of human tragedy with universal and historical resonance, detailing our propensity for savage acts of mindless violence, which of course is hard-wired into us and echoes through the centuries. But the film lacks aesthetic fluidity and the pacing is slow, the story letting itself go – much like the tribe looking for a home. Meanwhile, the action-point Paul Greengrass-like editing, with a blurry handheld camera swooping through the trees like tap dancing, is an assault on the eyeballs.

The origin really needed a Mel Gibson or Nicolas Winding Refn type director to elevate it: to create something a little more muscular, visceral, punchy and exciting. Instead, it seems Cummings has no particular skill or fondness for its horror elements: the jump scares are poorly executed, and it sometimes feels like the film goes through the genre motions. What fascinates him more is the earth, the mythical air, the drama of people rushing without thinking, the recreation of a moment in human history rarely depicted on screen.

Visit the BFI London Film Festival page to delve deeper into the wealth of films presented this year.