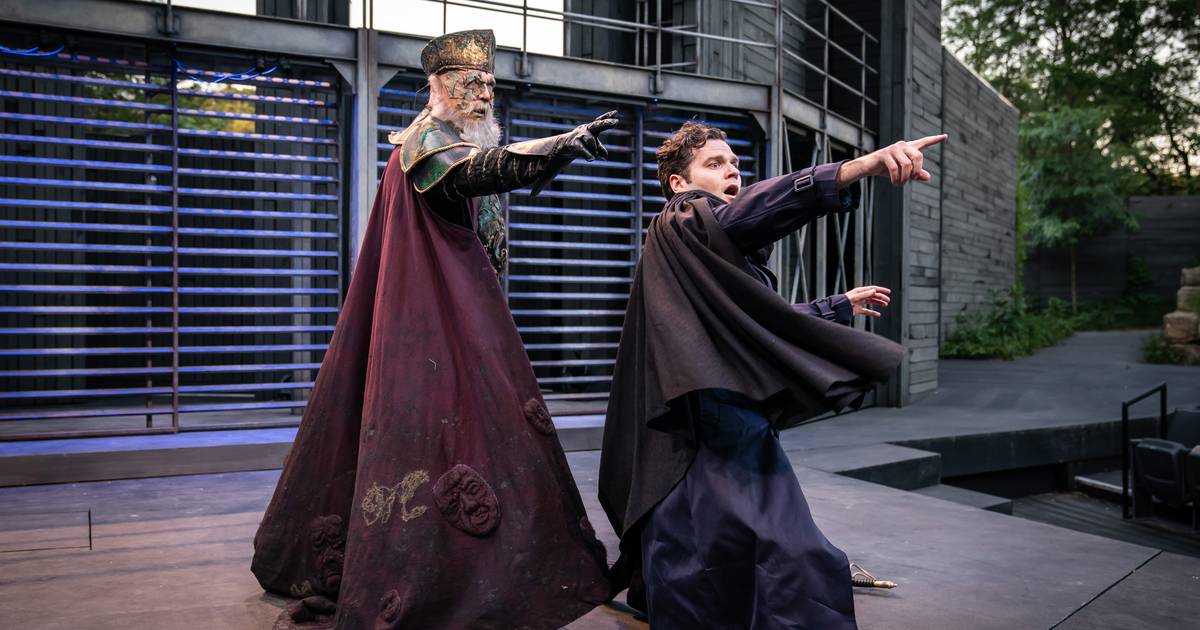 Once again, the stars shine at the open-air Hill Theater, with the American Players Theater production of “Hamlet.”

Last seen on the Hill in 2013, the longest – and most popular of Shakespeare’s 37 plays – currently features a magnificent 19-play cast led by James DeVita, who coincidentally played Claudius in the 2013 production. And DeVita, always stunning and passionate, kept this production well-paced (no four-hour show here!) and engaging.

‘The Tragedy of Hamlet, Prince of Denmark’ has spanned over 400 years and has seen many well-known actors in the title role – from Laurence Olivier to Mel Gibson. And who isn’t familiar with the ultimate tragic revenge/dysfunctional family saga?

“One misfortune walks on the heels of another” in Elsinore, Denmark. Late at night, the sentries continue to see a ghost that bears an uncanny resemblance to the late king. Hamlet’s friend Horatio is brought in as a witness and tells Hamlet of the apparition. Hamlet learns from the ghost, his father, that his uncle Claudius killed him; Hamlet is also upset that his mother, Gertrude, married Claudius two months after his father died. Hamlet seeks revenge, and the ball begins to roll over a series of tragic events that involve friends, his love Ophelia, and enemies.

“What a job is a man” – and in this case, that man is Nate Burger. As Hamlet he is amazing. The amount of lines in the soliloquies and monologues of Hamlet alone that Burger delivers consistently – and flawlessly – is an incredible achievement. Seated, he makes a superb “to be or not to be”. More extraordinary is his rhythmic soliloquy about his father’s death and his mother’s “cruelest speed” in marrying; Burger’s descent into madness is done without melancholy, but with thoughtful reflection. It’s a wonderful contradiction – is it pretense or reality? Burger is charismatic, handsome, tall, vocally and physically expressive (capturing the full gamut of happiness, panic, fear, pain and peace) and perfectly cast.

But so does Triney Sandoval as the wicked, cunning Claudius. He is arrogant, a loud, stubborn roar and has the voice and attitude to snatch the high and mighty king. And you almost fall for his charms with his prayer “forgive me my filthy murder” and his apparent concern for Gertrude.

David Daniel, the “so excellent king” and murdered father, is regal and rightly vindictive, and a complete reversal of the comic gravedigger he portrays in act two. He is wonderful.

Luckily, Colleen Madden’s Gertrude isn’t the typical sweet queen. Madden delivers one of the best Ophelia drowning announcements I’ve ever heard. She is truly desperate with her “words like swords” and shows a turbulent relationship with her son. Alys Dickerson is a strong, devoted and obedient Ophelia with a beautiful singing voice. The traditional male role of Horatio, Hamlet’s best friend, is performed with swagger and understanding by the very skilled Kelsey Brennan.

Chiké Johnson’s Polonius is played intelligently, not aged or awkward. He is decisive, verbose and manages to deliver the best known and most recognized lines to his son, Laertes: “Be true to yourself…neither lender nor borrower.

And for Laertes? Jamal James is a fierce, haunting, magnificent and larger-than-life character, imposing in size and voice. Best enraged with Hamlet and heartbreaking with his heartbreaking reaction to Ophelia’s drowning, James is captivating.

What also makes this production so strong and viable is its simple and ingenious set designed by Takeshi Kata – a series of sliding panels, bars and spiral staircases so utilitarian and understated. Daniele Tyler Mathew’s costumes may be a mix of eras from Shakespearian times, 1920s and 1940s to futuristic, but they match the characters and are visually appealing, none more breathtaking than the ghost of the dead king with her marbled makeup coinciding with the gold. , green and purple of his armor and cape. Sound effects and original music by André Pluess and lighting designs by Jason Fassl are smooth, complementary enhancements. Fight director Jeb Burris’ work with Burger, James, and Sandoval is believable and very satisfying, especially in the noise and slice of the finale.

APT Artistic Director Brenda DeVita said, “Hamlet is one of those plays that we get to see and revisit time after time with new eyes and a new perspective.” James DeVita gives us this fresh perspective from start to finish; perhaps more than any other director, he illustrates how the characters in “Hamlet” suffer from a myriad of societal expectations and rules of duty and obedience.

As Hamlet says, “the play is the thing”, and in this case, APT’s play is a phenomenal thing.

• Regina Belt-Daniels is an avid fan of Shakespeare’s “Hamlet”. She is an actress and director who began her career in the region on stage in 1985 at the Woodstock Opera House. When not traveling with her husband, she enjoys teaching, attending plays and serving on regional theater boards. She is currently directing the next Elgin Theater Company production, ‘I Hate Hamlet’.

IF YOU ARE GOING TO