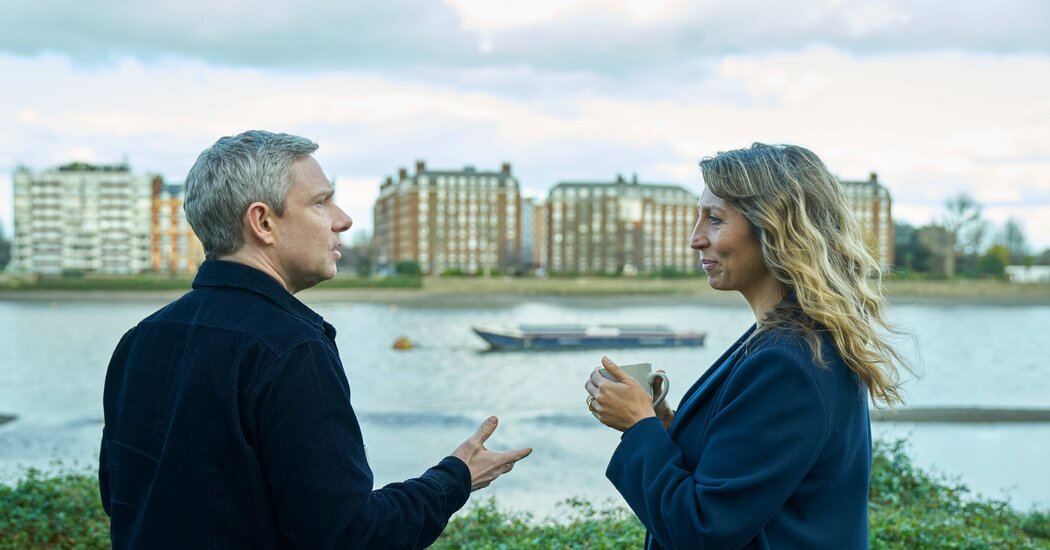 Playing this week: ‘Breeders’ and ‘The Time Traveler’s Wife’

Between network, cable and streaming, the modern television landscape is vast. Here are some of the shows, specials and movies coming to television this week, May 9-15. Details and times are subject to change.

BREEDERS 10 p.m. on FX. “Sometimes the bad guy is sexier” isn’t a phrase you want to hear if you’re a character played by Martin Freeman. Alas, it’s a sentence that Ally (Daisy Haggard) says to her husband, Paul (Freeman), in a trailer for the new season of this black comedy. The show’s previous two seasons have established it as a series that isn’t afraid to show parenthood as an often messy, sometimes frustrating endeavor. The third season, which premieres Monday, is no different. It picks up with Paul living apart from the rest of the family, a sequel to an anxious Season 2 finale in which the couple’s eldest son, Luke (Alex Eastwood), punched Paul.

BREATHLESS (1961) 10:15 p.m. on TCM. When Jean-Luc Godard’s first feature film was released in the United States in 1961, New York Times critic Bosley Crowther wrote that it was a “sordid” film, then added a qualifier: ” sordid is really a sweet word for its pile of gross indecency. But the film’s ability to shake viewers up helped make it a touchstone, and its story of a French criminal (Jean-Paul Belmondo) and an American student (Jean Seberg) in Paris remains powerful. AO Scott, writing in The Times five decades after Crowther, was kinder to the film. “Even though it may have influenced what was to come later, there’s still nothing else like it,” Scott said. “Her sexual candor is still amazing, and even now, at 50, she’s still cool, still fresh, still — after all this time! – a bulletin of the future of films.

EARTH (2021) 7:30 p.m. on HBO Signature. A woman embarks on a healing journey that nearly kills her in “Land,” Robin Wright’s feature debut. After a tragedy, Wright’s character, Edee, leaves his hometown and moves to a remote cabin in Wyoming. While struggling to live off the land, she encounters a hunter (Demián Bichir) who is adept at survival both in the wild and following trauma. The film, which was actually shot in Alberta, Canada, captures natural landscapes in a “lush and piercingly clear” manner, wrote Glenn Kenny in his review for The Times. “Wright’s film is ambitious (this place! this time!), but not grandiose,” Kenny said. “Its storytelling economy helps make it believable and possibly moving.”

FURY (2014) 9 p.m. on BBC America and JOJO RABBIT 9:40 p.m. on FXM. It would be hard to find two films that tackle the same difficult topic in more contrast than “Fury” and “Jojo Rabbit.” Both are WWII movies, but that’s about where the similarities end. In ‘Fury’, Brad Pitt plays the leader of an American tank crew sent on a long-term mission to Germany in 1945. The film, directed by David Ayer (“End of Watch”), is as frankly brutal as its title. could do it. suggest. “Jojo Rabbit”, on the other hand, is a prank. Written and directed by Taika Waititi, whose screenplay was adapted from the novel “Caging Skies” by Christine Leunens, it follows a German boy, Johannes (Roman Griffin Davis), living in an elevated version of the same period. Johannes’ imaginary friend is Adolf Hitler; he is sent to a Hitler Youth day camp. Yet Johannes’ mother, Rosie (Scarlett Johansson), doesn’t buy into Nazi propaganda – and, to her surprise, Johannes hooks up with a Jewish teenager, Elsa (Thomasin McKenzie), whom her mother is secretly harboring.

COUPLE THERAPY 8 p.m. on Showtime. The third season of this docu-series — which lets viewers act like a fly on the wall of couples therapy sessions — features a new set of partners who work through issues with New York City therapist Dr. Orna Guralnik. New couples arrive with issues related to old traumas, parenthood, and open relationships.

GREAT PERFORMANCE: ANYTHING GOES 9 p.m. on PBS (check local listings). Sutton Foster, who now stars opposite Hugh Jackman in “The Music Man” on Broadway, leads this recorded stage performance of “Anything Goes,” the musical that combines romance at sea with songs by Cole Porter. This production, by Kathleen Marshall, looks back to the age of the musical (its first Broadway production was in 1934), with retro Art Deco sets and costumes – and words to match. It’s “a farrago of dialogue filled with zinger, vaudeville-style antics and musical numbers pretending only to co-exist as a cohesive plot,” wrote Ben Brantley in his review for The Times. Foster, Brantley wrote, acts as “an evangelist of musical comedy joy”.

THE MATRIX: RESURRECTIONS (2021) 8 p.m. on HBO. Nostalgia is sometimes subverted and sometimes leaned into in this Lana Wachowski “Matrix” sequel. Keanu Reeves and Carrie-Anne Moss, the stars of the first films, return as versions of their original characters living in a new future reality where Neo (Reeves) is a video game designer who frequents the same cafe as Trinity (Moss) . Their memories of each other are erased, but their fates remain linked. It “plays like a loving, narratively coagulated tribute video to the ‘Matrix’ cycle itself”, wrote Manohla Dargis in her review for The Times, “with countless bullets and almost as many flashbacks to young Neo”.

THE TIME TRAVELER’S WIFE 9 p.m. on HBO. The last time Audrey Niffenegger’s hugely popular 2003 debut novel was adapted for the screen was through a 2009 film starring Rachel McAdams and Eric Bana which was poorly received. The extended and episodic structure of this new television adaptation could be an advantage, given that the plot of the book is articulated over long periods: it centers on an artist, Clare (played this time by Rose Leslie), and a librarian, Henry (Theo James), in a relationship complicated by a disorder that causes Henry to jump back in time.

Taika Waititi says Thor: Love And Thunder is ‘a fantastic movie’ – and cooler than he expected | Movies