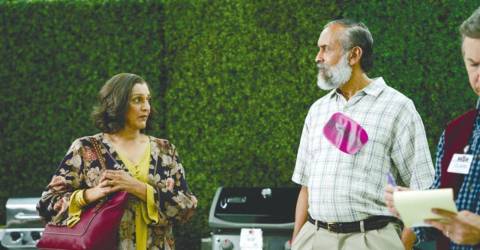 THE the lives and situations of eight different women are at the center of Roarthe latest series on the AppleTV+ streaming platform.

The series premiered on April 15 and is based on a book of the same name by best-selling author Cecelia Ahern, a collection of short stories about women. In total, there are eight episodes, each focusing on one woman’s story.

The cast includes Nicole Kidman, Issa Rae, Cynthia Erivo, Alison Brie, and Meera Syal, and portrays the situations these ordinary women face, which may seem very relevant and relevant to other women these days, despite the fact that characters develop strange illnesses or unusual habits, or even start talking to animals.

Each episode is only about 30-40 minutes long, and the title reveals what to expect in the episode. Some episodes are engaging and interesting to watch while making you curious about what happens at the end.

For example, in The Woman Who Solved Her Own Murdera woman realizes she was murdered but she doesn’t know who did this to her.

Other episodes like that of an African-American author who finds herself disappearing are a revelation; while another episode which is about a mother who returns to the corporate world and has to deal with insensitive colleagues while feeling guilty for not being there to take care of her children, is very relevant for our present life.

Some episodes will make you smile at the end. For instance, The woman who sat on the bench is a fun story about a woman whose mother believes in choosing beauty over intelligence, and who literally becomes a trophy on the shelf.

While in another episode, an Indian woman spends her whole life serving her husband, but is able to regain freedom when she “surrenders” her husband.

However, I suggest you skip The woman who fed the duckwhich tells the story of a bad “relationship” between a talking duck and a medical student, because it’s uncomfortable to watch.

Overall, the series is entertaining to watch as each episode explores previously unnoticed aspects of a woman’s life. However, it’s not just about achieving a victory at the end, but rather about the message or life lessons the characters learn along their journey.

As for the acting, Kidman, who is the show’s executive producer, is amazing in her role. Besides Kidman, Rae and Erivo are good in their respective roles.

We don’t know if there will be a second season or not because the novel actually had 30 stories and only eight are featured in this series. But it’s worth the wait to find out.