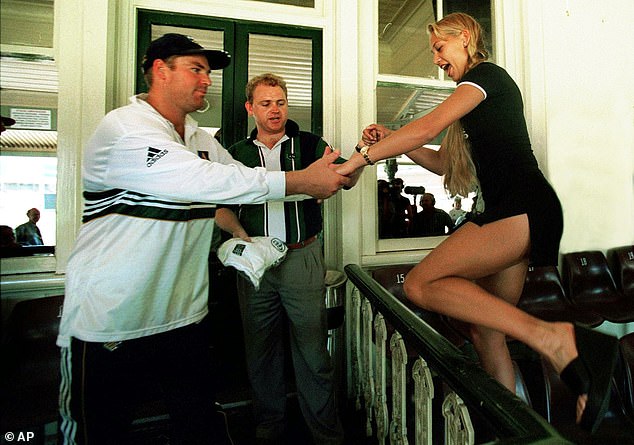 A meeting between glamorous tennis star Anna Kournikova and Shane Warne is perhaps the best example of the cricketing legend’s reach as an international sports legend.

Celebrities around the world have joined in the outpouring of grief after the legendary leg spinner was found dead at his luxurious Thai villa last Friday.

Actor Hugh Jackman, singer Mick Jagger and musician Ed Sheeran are among the celebrities who have paid tribute to the late cricketer star.

Warne’s presence seems to have crept into even the most unexpected corners of the world and even into football-obsessed Russia.

Glamorous tennis star Anna Kournikova had Warne high on her wish list when she visited Australia in 1998.

“We almost forgot how big he was when he was playing,” journalist Robert Craddock told The Follow On podcast.

“Anna Kournikova, the most glamorous tennis player and athlete in the world, she was in Australia for the summer and wanted to meet Shane Warne.”

Kournikova made a pit stop to visit Warne at the Sydney cricket ground before the pair immediately hit it off.

“And out of the blue (she) came to practice at SCG and heads were spinning, cameras were rolling,” Craddock said. “She wanted to meet Warnie – it was amazing.”

The couple were pictured grinning from ear to ear as they chatted like old friends.

Kournikova laughed at Warne’s famous charm and the couple even shared a hug.

Warne was only too quick to play the gentleman as he helped Kournikova onto a handrail in the SCG stands.

“The thing about Shane Warne was not just a cricketer, he was a rockstar,” former teammate Brett Lee said on The Brett Lee podcast.

“And if you take a look at the tributes that have poured in from around the world from Sir Elton John, from Mick Jagger, from Ed Sheeran, from Coldplay.

Warne’s presence seems to have crept into even the most unexpected corners of the world and football-obsessed Russia.

“You have music royalty, sports royalty, royalty in general. That’s who Shane Warne was – he touched a lot of people’s lives.

Kournikova then met her future partner and Spanish songwriter Enrique Iglesias on set while filming Escape in December 2001.

Severe back and spine problems forced Kournikova to hang up her tennis racket in 2003 before settling down and having three children with Iglesias.

Warne may have been dead for 45 minutes before paramedics were called to his luxury villa in Thailand, first responders say.

The revelation comes as a member of staff at Samujana Villas says he charmed her and other colleagues with his charisma and kindness during the short time he was there before his sudden death less than 24 hours after getting off the plane.

Anucha Hanaiam and Kittchai Huadmuang are both paramedics who responded to distressing calls from the resort on the afternoon of Friday March 4.

They told Daily Mail Australia it was likely Warne had suffered a heart attack while relaxing on his own long before his friends thought of watching him in his bedroom.

Actor Hugh Jackman, singer Mick Jagger and musician Ed Sheeran are among the celebrities who have paid tribute to the late cricketer star.

Kournikova (pictured, with partner Enrique Iglesias) made a pit stop to visit Warne at the Sydney cricket ground before the pair immediately hit it off

The big Australian spinner has planned a relaxing afternoon on Friday with several masseuses and a manicure and pedicure booked to come to the villa for back-to-back treatments.

A staff member at the resort told Daily Mail Australia that most treatments were booked through its villa manager, using staff at nearby affiliated salons.

A second massage was likely booked on Warne’s behalf by a friend or the 52-year-old himself.

After receiving his spa treatments, Warne hoped to settle down to watch the first Australia v Pakistan Test on TV and was going to end the week by heading to a local bar with his friends, but he never made it.