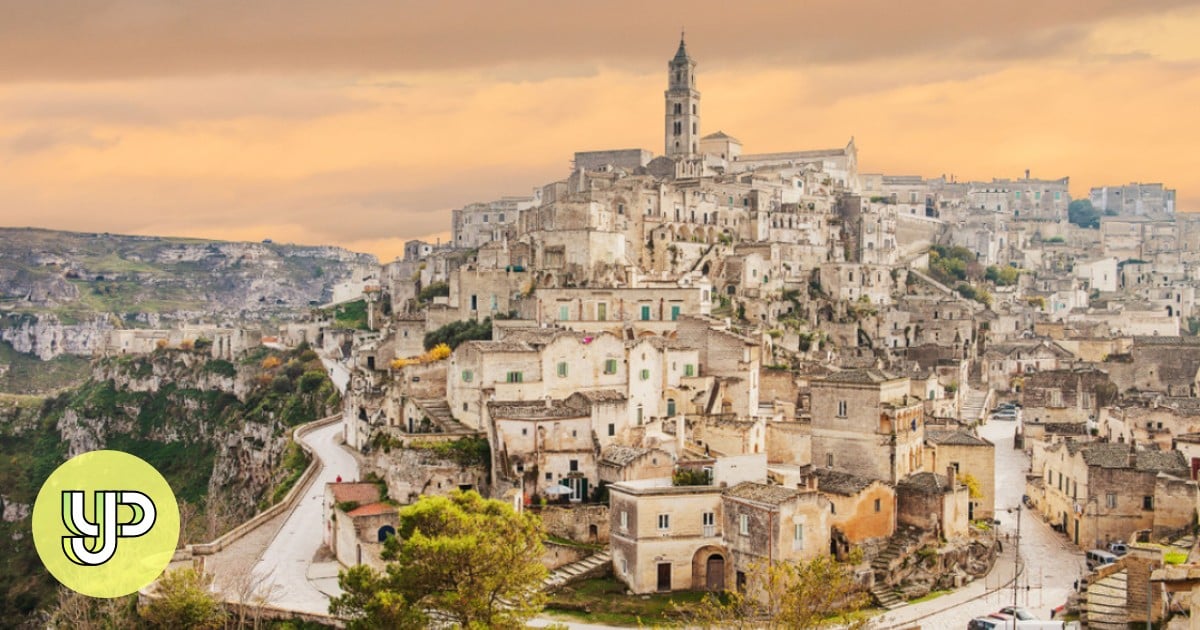 Read the following text and answer questions 1 to 9 below:

[1] When James Bond took a death-defying motorcycle jump for No time to die in front of the cave house where her ancestors had lived for centuries, Dora Cappiello rushed to tell her 92-year-old father. “One of the most spectacular scenes in the film was shot outside of where my father was born,” she said proudly.

[2] Matera – clinging to a steep hill above a barren southern Italian landscape – is one of the last places Daniel Craig would be greeted with the words: “We’ve been waiting for you, Mr. Bond.” Matera has been home to cave dwellers for 9,000 years and is the site of the country’s first known human habitation. In the 1950s, it was called “the shame of Italy”, when its people were found living in shockingly backward and unsanitary conditions. Some 15,000 people lived in cave houses, with cattle and families crammed into cramped spaces without water, natural light or electricity.

[3] Matera has become synonymous with poverty, infant mortality, and medieval levels of disease. The inhabitants of the old town – called the Sassi, from the Italian word for stone – were hastily evacuated to a bland and functional new city center of modern residential blocks a mile and a half away. Abandoned, the Sassi have become a ghost town of lurking wanderers, fugitives and packs of wolves, with many displaced residents too ashamed to ever return.

[4] Yet a new generation of evacuated youth with different ideas rebelled against the indifferent tide of history that was sweeping over the Sassi. In the 1990s, the turmoil of a timid revival began when cave houses were renovated into cafes and boutique hotels. This transformation accelerated as tourists flocked after the filming of Mel Gibson The passion of Christ in Matera in 2004. Today, the city’s rehabilitation has been boosted by its starring role in one of the biggest films of 2021.

[5] Matera’s international profile could hardly be further from her image a century ago, when she was chosen as the place of internal exile for political prisoners under the fascist regime of Benito Mussolini. 75 years later, Matera is a European capital of culture and one of the most astonishing stories of the wealth of global tourism. It’s also probably the only city in Europe where you can book a room first occupied by humans 9,000 years ago. The ravine around the old town is dotted with 1,500 cave dwellings dating from the Paleolithic era, while an intricate network of underground cisterns has been discovered.

[6] Today, the people of Matera are proud of the Sassi and their history in a way that was unthinkable when Cappiello was a child. Cappiello left Matera to work in Rome, Madrid and elsewhere abroad, but his heart remained in the Sassi. “The first families started to come back in the 1990s – not poor families but professionals: doctors, engineers and architects,” she recalls. She returned 20 years ago to enter the tourism industry.

[7] “It was just a dream because we didn’t have a lot of tourists,” she said. “Matera was completely unknown even to Italians… The first change came with Mel Gibson’s film. Then Matera became even more famous because he was made [a] European capital of culture. Now it is getting really popular. For my generation, this is a great opportunity.
Source: South China Morning Post, September 30

Play Kahoot! play on this story in class or with your friends by clicking on the link here.

Or play alone below to test your understanding:

1. Which of the following best describes what Cappiello thought about the shooting of No time to die near his ancestral home in paragraph 1?
A. aggravating
B. exciting
vs. spectacular
D. incomprehensible

2. According to paragraph 2, was the environment in which the people of Matera lived in the 1950s considered typical by the government of the country at the time, and why? (2 points)

3. In what type of accommodation have the residents of Matera been relocated in accordance with paragraph 3?

4. Which word best describes the pace of the Sassi revival in the 1990s in paragraph 4?
A. gradual
B. immediate
vs. annoying
D. tedious

6. Based on your understanding of paragraph 5, why was Matera chosen as the European Capital of Culture?

7. In paragraph 6, Cappiello lists some of the jobs of those who moved to the Sassi in the 1990s. What does this suggest about the city?
A. Its new status as a trendy neighborhood has been well received by low-income people looking for cheap accommodation.
B. Its living conditions have improved considerably to the extent that professionals are ready to live there.
vs. Its incredible history has attracted skilled workers to return to the city despite the appalling conditions.
D. none of the above

8. Decide whether the following statements about Matera are true, false or not given in the text. (4 points)
(I) The city had previously been used to hold prisoners.
(ii) It was so notorious that even the homeless avoided it.
(iii) Perhaps the former inhabitants who lived there in the 1950s should have used candles in the house during the day.
(iv) After the transformation of the city, more than half of the original inhabitants returned.

9. Which of the following statements best describes the tone of this text?
A. persuasive
B. argumentative
vs. expository
D. descriptive

1. B
2. No, because Matera was called “shame of Italy” and its inhabitants lived in scandalously backward and unsanitary conditions.
3. a new downtown of modern residential blocks4. A
5. No time to die6. It features natural and historical attractions, including cave dwellings that were first occupied by humans 9,000 years ago and an intricate network of underground cisterns.
7. B
8. (i) T; (ii) F; (iii) T; (iv) NG
9. D