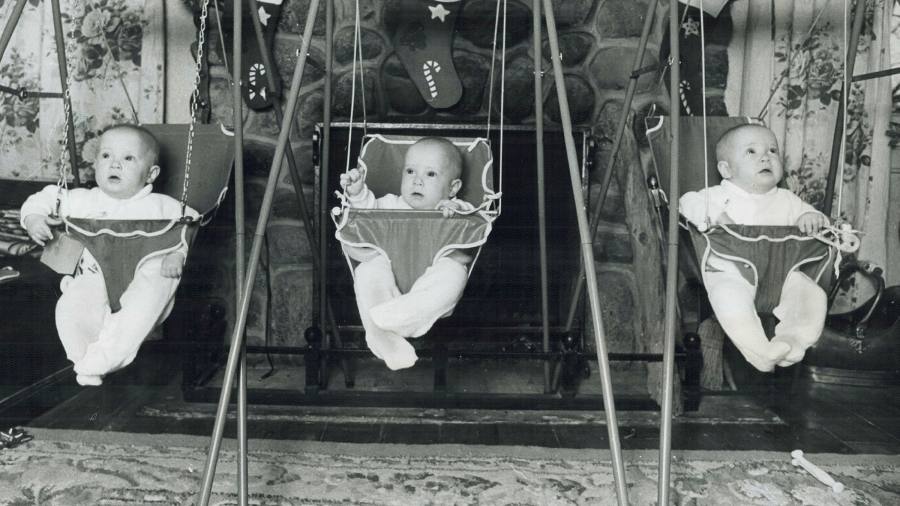 Opening in the early 1970s and ending four and a half decades later, at the heart of the story are the Oppenheimer triplets. The children of Salo and Johanna, they were conceived in 1981, with the help of the best infertility clinic in Manhattan. There is Harrison, “the smartest”; Lewyn, “the odd one”; and Sally, “the girl”. Bound by biology, but otherwise as detached and discreet as three individuals can be, each is a millstone around the others’ necks; all three “in full flight from each other to their ancestral Petri dish”.

In fact, this whole family is holding on to increasingly frayed threads. For the casual observer, the Oppenheimers have it all. Salo earns a pretty penny managing the family investment company. They live in a sought-after brownstone on the Brooklyn Esplanade (bought in 1979, just before anyone else), summer in their home on Martha’s Vineyard, and their children attend a prestigious left-leaning “multi-colored” Brooklyn private school that values ​​effort over success. But there’s no end to the mess and misery lurking behind that polished exterior.

Class, race and politics all play their part, sometimes to particularly entertaining effect

Despite poor Johanna’s best efforts to create some intimacy between them, the Oppenheimers are just “five humans living together”. [ . . . ] they were not and had never been a family. Salo, on the other hand, isn’t a traditional villain, but he is a troubled, barely standing soul. Still traumatized by the horrific car accident he was involved in as a young college student – which left his then-girlfriend and best friend dead – his only consolation lies in his art collection, which it keeps in a specially designed, air-conditioned, high-security warehouse. His refuge from the world.

Korelitz empathetically cradles husband and wife, each mired in their own loneliness and pain, tender yet truthful about both their hurts and their failures. When, in the second of the book’s three parts—which opens in the fall of 2000, when the triplets leave home for college—their perspective is overtaken by that of their children, one cannot help but to feel a bit of a loss. Especially because this change is preceded by Johanna’s most desperate and dramatic moment.

With the triplets about to leave the nest and her marriage in tatters, she remembers that there is one last blastocyst still frozen at the fertility clinic. Enter the “latecomer” from the novel’s title, which will first rip the family apart, then, 17 years later, reunite them.

With each new book Korelitz publishes, she adds another string to her bow, and she is a multi-talented writer. You should have known (2014) – later adapted into the significantly less effective HBO TV series The defeatstarring Nicole Kidman and Hugh Grant – was a clever and psychologically intense contribution to the then hugely popular marriage thriller genre. The parcelpublished last year, delivered a page-turning mystery that also delved into the murky morality of plagiarism.

Now with The Latecomer, she served a contemporary play on the great bouffant novel of the 19th century. It’s a little too mannered to be called strictly a state-of-the-nation piece; nonetheless, class, race, and politics all play their part, and to particularly entertaining effect when it comes to Harrison’s storyline. (There’s a simple trajectory between the ninth-grader who joins the swim team ‘because he liked the fact that when he had his head under water people wouldn’t talk to him’ and the young arrogant conservative who appears as a regular pundit on Fox News.)

Filled with incident – ​​a tragic accident, an extramarital affair, a secret love child – and equally heavy with revelation and reconciliation, there’s something slightly over the top about it all, every plot twist meticulously constructed.

Korelitz’s prose borders on verbosity, and it’s free and easy with its exclamation points. You get the distinct impression that she’s having fun with every bluster, especially when it comes to her chapter headings, in the great tradition of Dickens or Fielding: the tragedy of revenge reaches its inevitable conclusion. In truth, The Latecomer is a bit of both, which makes it so deliciously appealing.