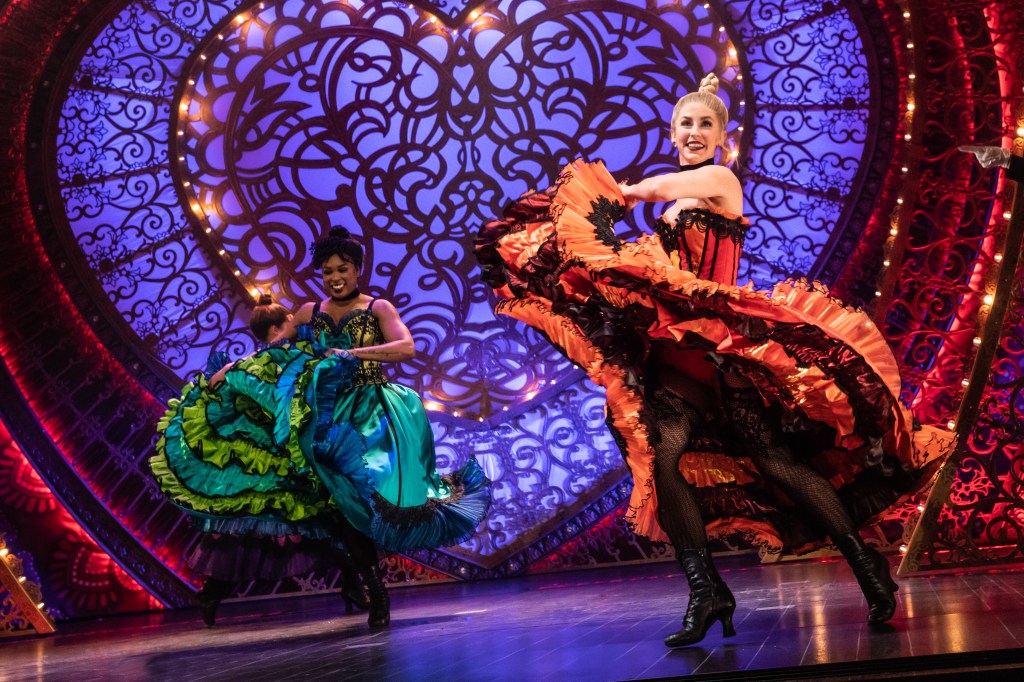 Baz Luhrmann is nothing but an original, a filmmaker often hailed for his brash showmanship and flirty eye-candy. “Moulin Rouge! The Musical,” Broadway’s exuberant tribute to its iconic 2001 film, also wows viewers with its sheer, pure spectacle.

The lavish Tony-winning tuner struts through the Orpheum Theater in San Francisco until November 6.

In the stunning opening tableau, the viewer is wowed by a windmill at one end of the glittering stage and an elephant at the other as the music glides from “Lady Marmalade” to Lady Gaga. Dig too deep into the glitz, glamor and glitz of this musical jukebox, however, and you come up a bit empty.

Admittedly, John Logan’s formula book (“Red”) is as thin as the fishnet stockings of can-can dancers. But for sheer pomp and pageantry (from confetti to crystals) and jaw-dropping remixes of a pantheon of pop hits, “Moulin” has no rival.

It’s a high-tension, low-comedy homage to “La Bohème,” the way “Bridgerton” is a bawdy riff on Jane Austen. The style rather than the substance is the secret of these racy festivities.

Director Alex Timbers captures the visual decadence of this turn-of-the-century fantasy about lust, love and money in the shadow of Montmartre. The swords are swallowed and the buttocks bare in this temple of debauchery of magnificent bodies. Catherine Zuber’s bejeweled costumes are breathtaking.

Meet the charming Satine (Courtney Reed), a scintillating singer who quit to trade carnal favors with the evil Duke of Monroth (David Harris) in exchange for financial support. In a world where your face is your fortune, she knows when it’s time to cash in.

Far be it from me to put off a score that mischievously mixes Soft Cell and the Rolling Stones with Beyonce and the Eurythmics. This frenetic pop music pastiche will often charm you even if the love story falls flat.

The actors surrender to the songs in a much more believable way than they do to each other. There’s zero chemistry between the protagonists, the period melodrama feels forced, and there’s no sting of loss to give us even a hint of emotion. The 2001 film memorably paired Ewan McGregor and Nicole Kidman as doomed lovers.

The fast segues between catchy pop hits are a gimmick that gets old fast as the show winds through 75 songs. At some point in the almost 3 hour piece, the ear hits an overload.

Since the bones of the story are also Greek, the mythology of Orpheus and Eurydice, it’s hard to avoid unflattering comparisons with the magical “Hadestown,” which recently held court in San Francisco.

Still, there are juicy moments for the inhabitants of the famous nightclub. Austin Durant steals more than one scene as a seedy impresario in a top hat and tailcoat. André Ward is sassy and gruff as the infamous artist Toulouse-Lautrec.

In the end, this kitsch musical had many audience members intoxicated to jump right in with the singing on opening night, “Mamma Mia!” style. If you, too, are dying to listen to a dizzying mix of Madonna, Lorde, Elton John and Katy Perry, you might want to pop the plug on this splashy extravaganza.

Book by John Logan, based on the 2001 film; presented by BroadwaySF