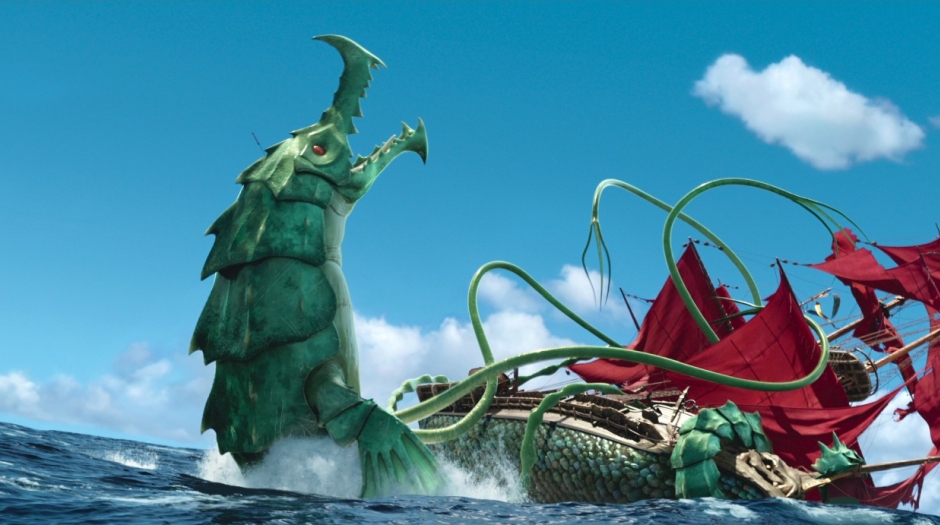 When Joshua Beveridge first read director Chris Williams’ script about massive, deadly underwater creatures and the valiant warrior sailors who hunt them, the former What if…? and Spider-Man: Into the Spider-Verse The character animator was, sure, freaked out, but not about the horned, hungry, larger-than-life monsters that would be front and center and steal the show.

It was the terrible, the vile…wait…the ropes.

“If you look back and rack your brains through other animated movies, you’ll notice there aren’t a lot of strings shown at all,” says Beveridge, who was responsible for the character animation in Williams’ new CG animation adventure, The beast from the sea, which debuts today, July 8, on Netflix. “The strings are painful to animate. Strings contain complex regions of slack that move back and forth, they pile up, they collide, they drag against surrounding objects. It’s hard to make it look like a string in an animation where there are no real physical properties and the character has to interact with it a lot. It’s like putting your hands in your pockets or in your hair, those are also incredibly complex things. The rope is one we couldn’t avoid.

He continues, “I knew how many strings we would need to animate on the ship and how many action sequences would drown us out if we didn’t have a better solution for them. I made a PowerPoint presentation to try to explain to our visual development team exactly what was difficult with strings and why we had to rethink how we work with them. It took six to eight months of development to create a system that we could work with in production. 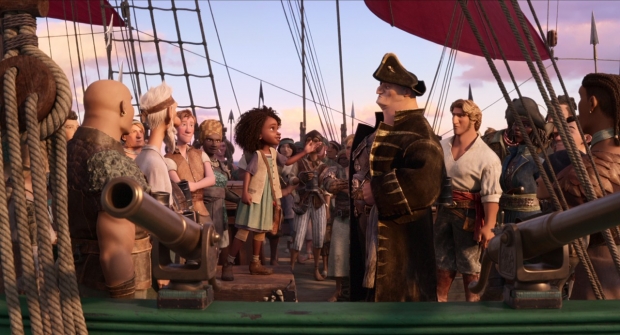 A stable and fast cable measurement tool with simulated play, developed by Sony Pictures Imageworks, was just one of many new systems created for production on The beast from the sea.

Williams’ story features a young Maisie Brumble, who embarks on the ship of legendary monster hunter Jacob Holland and his longtime mentor, Captain Crow. Together, Maisie and Jacob embark on an epic journey into uncharted waters and make history, befriending the most dangerous monster of them all.

Beveridge and animation director Zach Parrish, who previously worked with Williams on Big Hero 6has helped over 600 artists and production staff battle their own monsters in animation – tackling not only strings, but also constant water movement and facial wrinkles to improve character performance more mature. 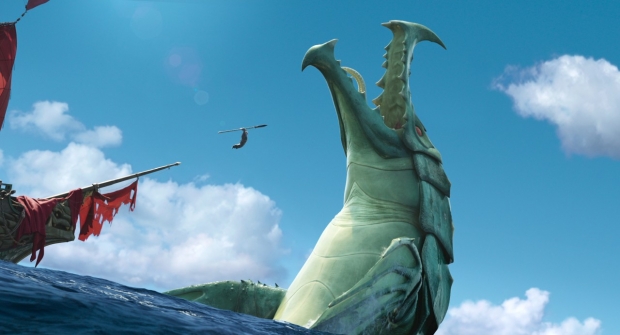 Beveridge says The beast from the sea is one of the most complex films Sony Imageworks has made.

“At least I believe it’s mathematically correct,” he said. “Every host that joined, when we debriefed them on all the new stuff, there was a lot of ‘Wow’.”

Parrish adds: “It’s huge. It’s epic. Chris really wanted to push the tone and try to do something a bit more mature and go for more grounded performances.

But, as they say, the devil is in the details and for animators to illustrate effective performances, they needed to ensure that the environment supported those performances and made them believable.

“In The beast from the sea, we’re on the water 75 percent of the time, or something like that,” says Parrish. “It’s a lot, and what was so impressive about the ‘Buoy System’ created by Imageworks was that it layered that movement on the water onto a character where you could focus on the performance as if it was static.”

To make the movie look like it was actually shot at sea, the team created The Buoy System by starting with an already-simulated ocean, removing all choppy surface detail, then creating a custom stress process so that animators can triangulate on a moving surface. . The amount of ocean affected by the animation could then be adjusted up and down to taste. This, in addition to working with sailing consultants Master and Commanderwere steps towards the team’s goal of “earning credibility with sailors”, as Beveridge puts it, and creating an immersive story. 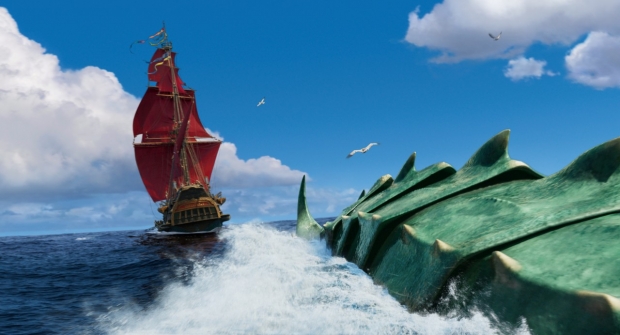 “Sometimes the boat would move like crazy, which we mimicked and mimicked in our video references,” says Parrish, who frequently dove into his own swimming pool at home to simulate drownings or get in and out of boats. “But there are a lot of conversations and quieter moments that still have a bit of that movement, or they’re sitting in a rowboat or something. And so, because they had the buoy system, the animators could layer that and dial that in, focus on one performance, and then fine-tune it at the end.

Combining animation and physics, Imageworks has also designed a new kind of swivel system called “The Sea Legs”, designed to stand on moving surfaces like boats and pick up that constant movement. A new platform was also created for the camera to make it look like a cameraman was standing on the same deck as the characters on the ship. And, as difficult as it was, Parrish and Beveridge say it was also a great adventure in discovering animation technology.

“Working on this movie gave us the chance to stretch something a little bit more that we hadn’t quite done,” Beveridge says. “There’s something exciting about it. I love pushing that needle in our medium.

He adds, “I don’t want to give the tools too much credit. Tools just make things that weren’t doable, more doable. But everything is handled by hand with an animator who makes absolutely all the decisions. There is nothing plug-and-play. But every advancement in our industry that makes things faster, really lets you do more. 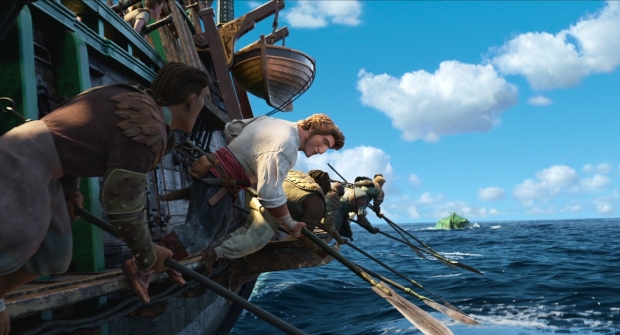 “More Things” like offering aged wisdom and years in the sun and on the water to The beast from the sea warrior characters by adding very detailed and deep wrinkles to faces like Captain Crow’s.

“The fancy technology we used for the wrinkles on our old characters that we called our ‘crease lines’ is something I’m proud of and I think will have future use as well,” says Beveridge. “I found on spider worms that once we started drawing emotion lines, it was so freeing to not have to worry about the topology grid that is on the character. You can just have creases, wrinkles, a few more stress lines, and you can dial it all over.

He continues: “And the The beast from the sea, instead of just drawing ink lines, we found a way to actually have them deeply sculpted, so it was more of a sculptural thing. And we could actually move them totally off the grid.

Parrish says one of the easter eggs of the design in this film is that those crease lines were also used on the film’s youngest character, Maisie, to enhance her performance.

“She’s one of the more straightforward characters in terms of her youth and everything,” Parrish says. “But the crease lines were still used in a few places on her just because you want her to be simple in her shape, but there are times when you have to push that emotion or push the tension and the wrinkles come out and they are integrated so well that you don’t really think about it. We really tried to focus on relationship building and character performance, especially in Jacob, Maisie and Crow, really getting that character specificity and thinking about the emotional journey they are on. 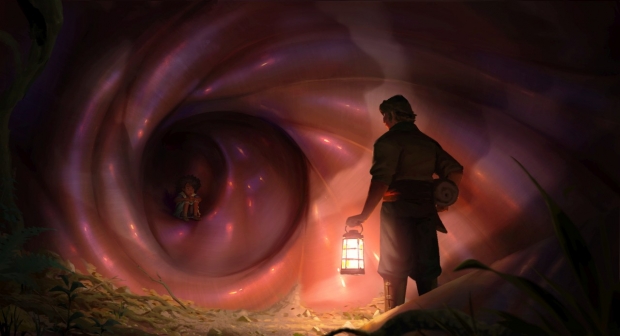 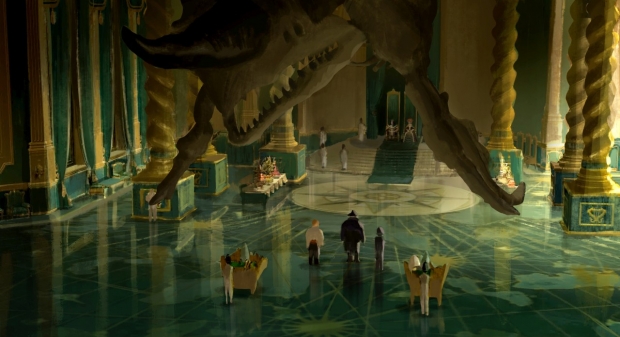 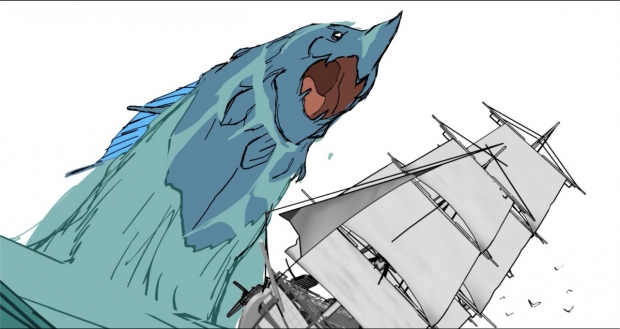 The ropes, the water, the wrinkles, all the little details in an animated film that often go unnoticed are, according to Parrish and Beveridge, essential to ensure that the great action sequences, where the characters beat on the back, or in the mouths, of monsters, can shine even brighter.

“There are so many levels of complication in this movie,” Parrish says. “Thousands of characters in environments and things like that, it adds a level of complication. But then there’s also shots of a character that were some of the hardest shots to pull off because it had to be about the right performance with the right sense of sincerity and depth, and those almost took as much time, if not more, than some of those really big action sequences.

Beveridge adds, “I think that’s why so many people are involved in the process. There are a lot of bowel checks. Each animator works on their plan and pours into it. Thus, tunnel vision is a constant enemy that we all fight. There were absolutely a lot of single eyelid pixel adjustments to the point where I felt like it could break hearts. 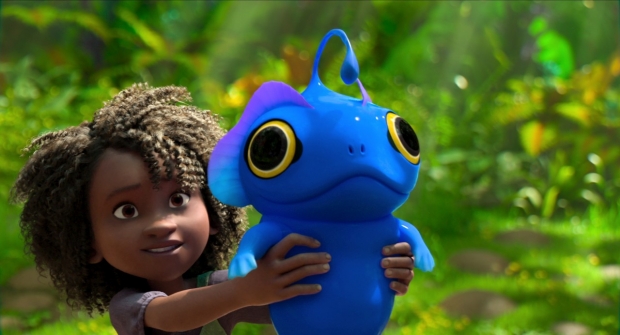 Beveridge says he even examined Mel Gibson‘s head and neck movements in detail in Brave heart as part of his character design research for The beast from the sea. No detail has been left to chance. “We talked a lot about Mel Gibson’s head lobs,” Parrish says. “I don’t know if it’s too honest to say that we were obsessed with everything. And we had a leader in Chris, who was also obsessed with everything. If even a wrinkle was out of place, it was noted. And the boat, the water, the ropes, all those things that we talked about the most because we wanted things to feel real and grounded and all because those little things actually carry those characters, whose stories, hopefully, we are very interested in.”

He adds: “And that was true for all the animators. It was everyone’s process. People had all kinds of crazy rigs set up inside their homes to make sure it felt like the right weight of a sword or some people had ropes that they put up because they were rock climbers and they hung inside their homes. It was actually really impressive how much people went into it to make sure it was authentic. [The Sea Beast] has been the ultimate toy box to jump into.

Victoria Davis is a full-time freelance journalist and part-time Otaku with an affinity for all things anime. She reported many stories ranging from activist news to entertainment. To learn more about his work, visit victoriadavisdepiction.com.