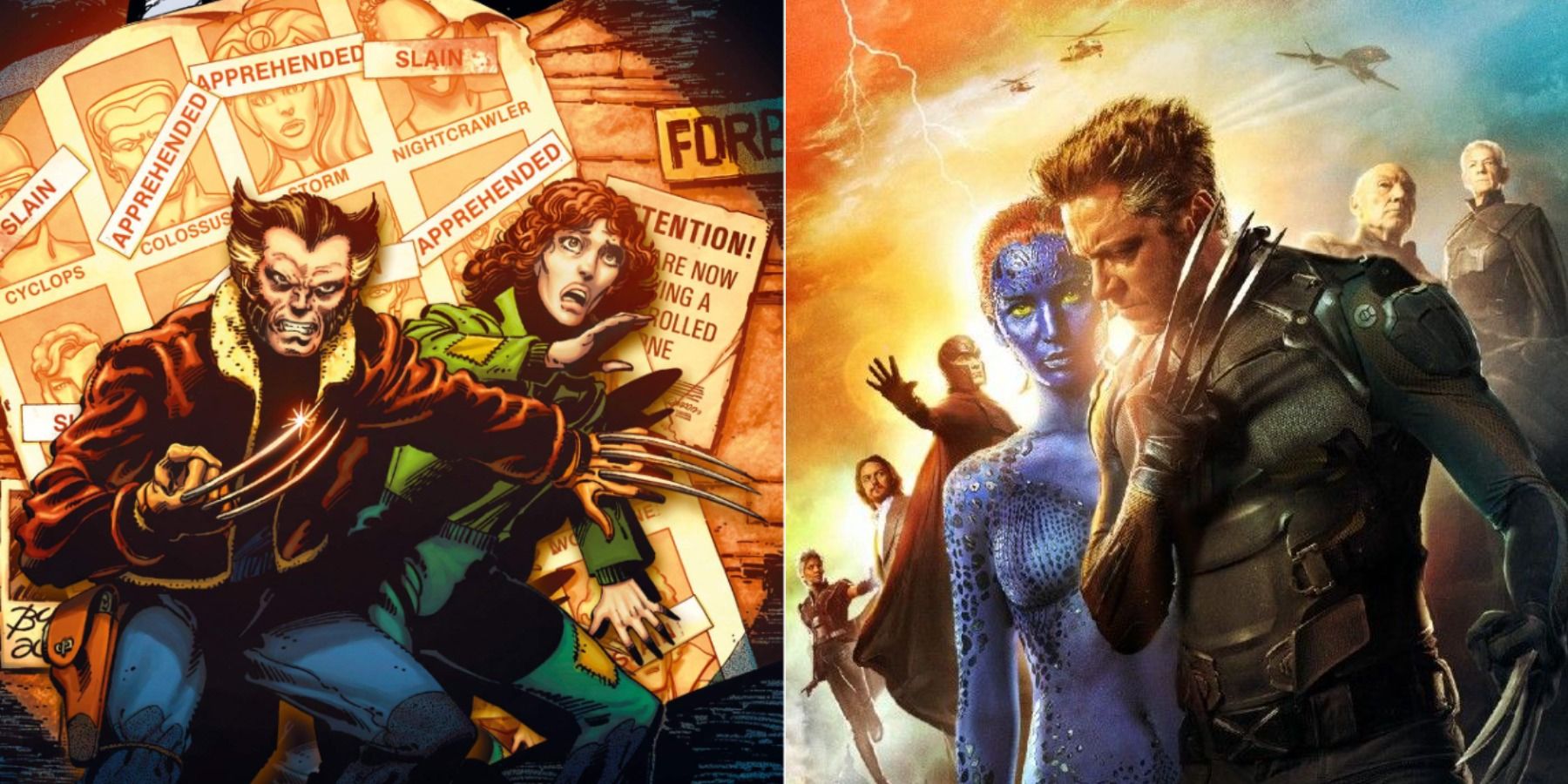 X-Men: Days of Future Past

When someone thinks of the iconic stories of the X-Men, “The Dark Phoenix Saga” and “Days Of Future Past” are the first that come to mind. Both tales were adapted for the screen, but the film X-Men: Days of Future Past was much better received than any attempt to bring The Dark Phoenix to the screen.

The story of an X-Man from the future coming to the present in order to prevent a dark future from happening proved compelling in both formats. That being said, the film adaptation is infamous for taking some pretty significant liberties with the source material.

Although X-Men: First Class had only been released three years before, eleven had passed through the universe and during that time a lot had happened to the newly formed X-Men. In the film, the X-Men and The Brotherhood were arrested or killed after Magneto was framed for killing John F. Kennedy, which made Charles Xavier bitter.

The comic follows “The Dark Phoenix Saga”, which ended only three months before. The aftermath of this storyline saw Cyclops leave the X-Men after Jean Grey’s death, with Storm leading the team.

There are fewer survivors in the future of comics

In the future timeline presented by the film, most of the major x-men characters have survived, with the only notable exceptions being Beast, Nightcrawler, and Angel. As the X-Men end up getting slaughtered by the Sentinels, it’s impressive that they survived as long as they did.

The X-Men in the comics aren’t so lucky, as over the years most of the mutant population has been herded into camps, leading to many deaths over the years. The last remaining X-Men are Kitty Pryde, Wolverine, Storm, Colossus, Rachel Summers, Franklin Richards, and Magneto, each coming together to complete one last mission to save the world.

Fox x-men the movies couldn’t really feature too many other Marvel heroes outside of The Merry Mutants, with the rights to The Avengers and Spider-Man held by other companies and The Fantastic Four languishing in cinematic purgatory. Thereby, X-Men: Days of Future Past is, as you might expect, a very X-Men-centric film.

In the comics, however, not only were the mutants slowly wiped out when the Sentinels took over, but all of the Avengers, Fantastic Four, and more were killed in the showdown. Yes X-Men: days of future past is ever remade in The MCU, it’s likely that a dark fate awaits Earth’s Mightiest Heroes in this grim future.

Sentinels are more ruthless in the movie

X-Men: Days of Future Past ends up being a bit of a bloodbath for the future resistance, with many heartbreaking deaths befalling the X-Men. The Sentinels, whose abilities are amplified by a sample of Mystique’s DNA, appear laser-focused on indiscriminately killing mutants in the film.

The Sentinels in the comics instead placed what remained of the mutants in internment camps, with the threat of the Sentinels expanding their empire beyond North America ushering in the threat of nuclear war. This makes the X-Men’s motivations less about avoiding the future and more about trying to keep that dark future from getting worse.

It should come as no surprise that those behind X-Men: Days of Future Past decided that Wolverine should be the one to return to the past. He’s definitely the movie’s best X-Man, but he’s also a box office draw, not to mention that the character’s involvement is more suited to the film’s 1970s setting.

However, while Wolverine gets a memorable moment in the comics, the role he fills in the film is instead taken over by Kitty Pryde. Kitty, who was once described as optimistic but silly, is transformed into a hardened veteran in an instant, which the character has slowly become over the years.

Wolverine’s Fate Is Darker in the Comics

X-Men: Days of Future Past features one of Hugh Jackman‘s best turns as Wolverine, with the actor completely settled into character by this point. The film ends with a glimpse of a happier future where Wolverine lives happily with the rest of the X-Men.

Wolverine gets a moment in the comics, but it’s not one that sees Marvel’s first mutant win out. In order to buy Kitty time, Wolverine is thrown onto an attacking sentry by Colossus, only to be quickly vaporized by the robot, and with no hope for a brighter future in the comics, this makes this Wolverine’s fate rather bleak.

The X-Men roster is different

When Wolverine returns to the past, the X-Men are in disarray. With the team dead or in prison, only a despondent Charles Xavier and a reluctant Beast are there to help Wolverine save the day.

The roster of X-Men from the comics is much more robust, with Storm leading the team and Wolverine, Colossus, Angel, Nightcrawler, and Kitty Pryde supporting her. While Charles and Hank don’t believe Wolverine in the film, the team is notably quicker to believe Kitty in the comics.

The assassin in the comics is the brotherhood

The crux of both versions of “Days of Future Past” is that the X-Men must prevent an assassin from killing a specific target, thus avoiding the ominous future. The killer in the film is a familiar killer, none other than Michael Fassbender’s Magneto, though a conflicted Mystique has his own target.

In the comics, the assassins are The Brotherhood, who band together under Mystique’s leadership in order to carry out the murder. While the two see the X-Men stop the assassination, they have very different results.

The target is different in the two media

A death in the past has major consequences in the future, but the two versions of the story have different targets. In the film, Magneto attempts to kill Richard Nixon, while Mystique plans to kill the film’s main villain, Bolivar Trask, the creator of The Sentinels, though she ultimately chooses to spare him.

RELATED: The 10 Most Underrated X-Men Villains In Marvel Comics

Meanwhile, in the comics, The Brotherhood attempts to kill Senator Robert Kelly, to whom Mystique shows no such restraint. Although the X-Men manage to save both individuals, it is the outcome of their action that is the biggest difference between the two versions of the story.

The sequel is significantly different.

After the deaths of Richard Nixon and Bolivar Trask are averted in the film, the dark future is completely erased. This leads to a new timeline where the mutant community is more accepted by the general public, as seen in X-Men: Apocalypse and dark phoenix.

The comic, on the other hand, ends with a wise quote from Xavier, while Senator Kelly sides with Trask, potentially hinting that the dark future the story presents is guaranteed. The story’s events have been repeated throughout the history of the X-Men, especially during Jonathan Hickman’s recent run.

NEXT: 10 Clichés In The X-Men Comics

DC officially confirms which hero is its version of Deadpool

Ever since he was a young boy, Seth Rector has had a love for all things geeky. Movies, TV shows, comics, and video games are what he considers his wheelhouse. A writer at heart, Seth says he’s over the moon now that he can write about what he loves. When he’s not writing for Screen Rant, he puts his film degree from Lights Film School to good use working on future film projects.