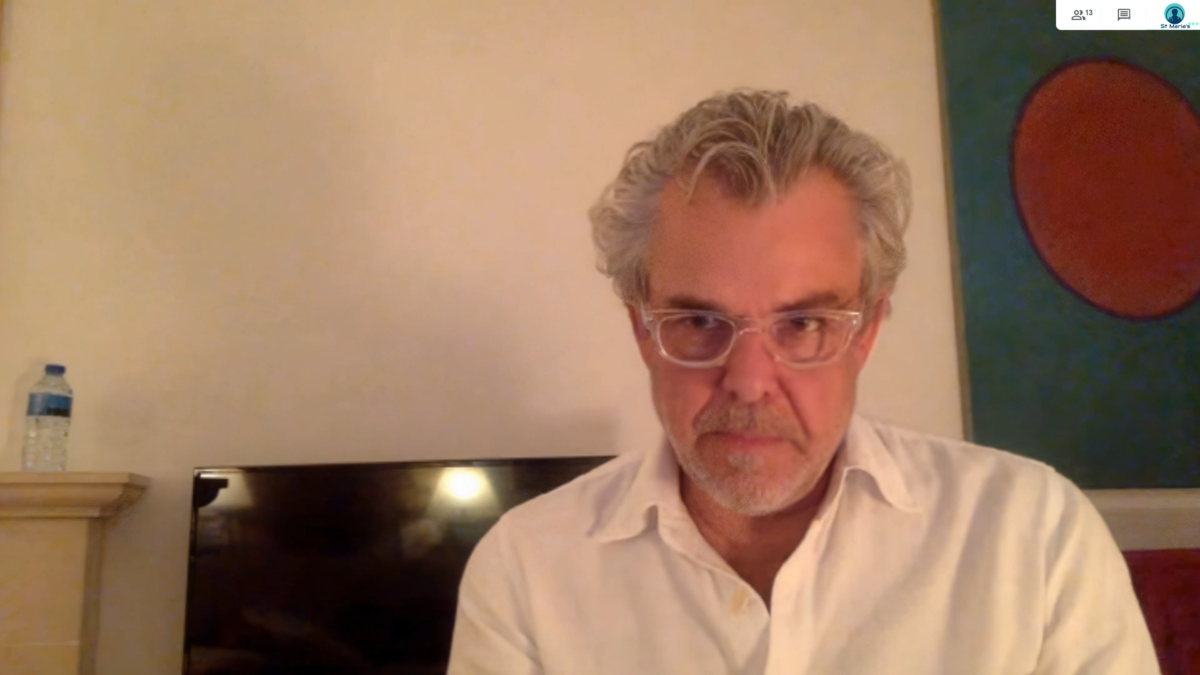 Danny Huston in “We Are Gathered Here Today”. Photo courtesy of Cinedigm.

Starring and produced by Danny Huston, “We Are Gathered Here Today” features an ensemble cast such as Lin Shaye, Phoebe Tonkin, Parker McKenna Posey, Luna Blaise, Nicole Ari Parker, Peter Jason, Jenny O’Hara, Bill Smitrovich, Rae Dawn Chong and Javicia Leslie. It is available digitally via Cinedigm. “It was great to work with them,” he said. “It’s hard to say goodbye and have to do it electronically. The same challenge was working with the actors. We have never met, but we look forward to this day. In the process of making this film, we were never able to see each other physically.

Written and Directed by Paul Boyd, “We Are Gathered Here Today” fixes on a family meeting via video conference during the COVID-19 pandemic. Eric Barrett produced alongside Huston for Mirror Films.

This film explores the emotions that more than one million American families have gone through since the start of this deadly pandemic. “It was truly an amazing experience,” he admitted. “Bringing the cast together and rehearsing so that we could become a family in the truest sense and a family of actors to bring together on a screen helped us define ourselves as characters but also represented different stratospheres in regards to this particular moment. in time.”

“We Are Gathered Here Today” is a film about a multi-generational mixed-race family who come together to say their final goodbyes to the family patriarch, while dealing with other underlying issues that family reunions can bring. This all takes place via Google Meet video conferencing.

The trailer for “We Are Gathered Here Today” can be seen below.

“This movie is about a family with dysfunctions and issues, and it’s about bringing a family together during that time when we can’t touch each other and say ‘goodbye’ or hug each other. It’s tragic, but it’s also about love and bringing people together,” he said.

Huston is known for his versatility and dramatic screen presence. Recognized for his roles in films like Martin Scorsese’s “The Aviator”, Alfonso Cuaron’s “Children of Men” and Alejandro Inarritu’s “21 Grams”, Huston has worked with some of the finest directors of his generation.

He got his start directing Mr. North with Robert Mitchum, Anthony Edwards and his sister Anjelica Huston. He then gave his breakthrough acting performance in the independent film Ivansxtc for which he was nominated for “Best Male Performance” at the 2003 Independent Spirit Awards.

Since then, his film acting work has included: “X-Men Origins: Wolverine”, “Robin Hood” by Ridley Scott, “Hitchcock” with Anthony Hopkins, “Wrath of the Titans” with Liam Neeson, “The Constant Gardener” with Rachel Weisz and Ralph Fiennes, “Marie Antoinette” by Sofia Coppola, “Birth” opposite Nicole Kidman, “30 Days of Night with Josh Hartnett” and “The Kingdom” by Peter Berg, among others.

In 2013, his critically acclaimed role as Ben the Butcher in “Magic City”, earned him a Golden Globe nomination for “Best Performance by an Actor in a Supporting Role in a Series, Miniseries or Motion Picture”. made for television.

His other TV acting work includes the hit TV series “Masters Of Sex” (Showtime), a recurring role on the wildly popular “American Horror Story” (FX), and performances on “You Don’t Know Jack”. (HBO) with Al Pacino and “John Adams” (HBO).

Additional credits include “Paranoid” for Netflix and ITV Studios, “All I See Is You” by Marc Forster, “Frankenstein” directed by Bernard Rose, “Pressure”, directed by Ron Scalpello and “Big Eyes” by Tim Burton.

Huston also directed in “The Last Photograph” which screened at the Edinburgh Film Festival and the Mill Valley Film Festival.

In 2017, Huston played Robert Evans in the stage adaptation of “The Kid Stays in the Picture” directed by Simon McBurney, for the Royal Court Theater in London. Huston also recently appeared in the worldwide box office hit “Wonder Woman”, directed by Patty Jenkins.

He was recently seen in the Netflix feature ‘IO’ opposite Anthony Mackie, as well as the feature ‘Stan and Ollie’, directed by Jon Baird for BBC Films.

Huston continues to star as “Dan Jenkins” in the Taylor Sheridan and Paramount television series “Yellowstone,” which is now airing its second season. It was the No. 1 summer series of 2019. Huston can be seen in a long season arc on the critically acclaimed HBO series “Succession.”

On being an actor in the digital age, Huston said, “It’s exciting. I’ve been playing around with this technology for a while now. Technology has enabled us to work during COVID, and it’s creating other innovative ways to manage the medium in the world of storytelling.

For young and aspiring actors, Huston encouraged them to “tell stories.” “Find a good story and tell a story that means something to you, and find any way to tell it,” he said.

Huston would love to step into a time warp and work with actors such as Humphrey Bogart and Lauren Bacall. “I would love to have this time capsule and go back in time and work with the actors who inspired me and the films I make in the present,” he said.

“My eureka moment was when I was on my dad filming John Huston’s movie in Morocco. That’s when I knew this was what I wanted to do in life” , he admitted.

Huston praised his experience in “Yellowstone.” “I love it,” he exclaimed. “Taylor Sheridan is a great storyteller of America today, its history and what brought us here. Working with Taylor and Kevin Costner was amazing, Kevin is one of the coolest guys around. Plus, Kevin’s music is great.

He talked about “The Constant Gardener,” which happens to be one of this reporter’s all-time favorite movies. “It was a great experience doing it. One of the luxuries of cinema is that you can explore different parts of the world like Kenya. Traveling there was such a luxury,” he said. “My character was very compromised.”

If he were to write, produce and direct his own short film, he replied, “It would be about social awareness and meaning in the context of the world we now inhabit. It would be relevant and poignant and it would mean something to me and to others. Most of my work is aimed at this.

Of the current chapter in his life, Huston responded, “Open spaces and new frontiers, and a willingness to explore more.”

If he had to have a super power, it would be to “go back and forth in time”. “I would love to have the opportunity to meet people I love like my dad. I would have loved to meet him young. It would have been great,” he said.

Regarding his definition of the word success, Huston said, “Finding peace and happiness within.” “So just stick with what you have,” he said.